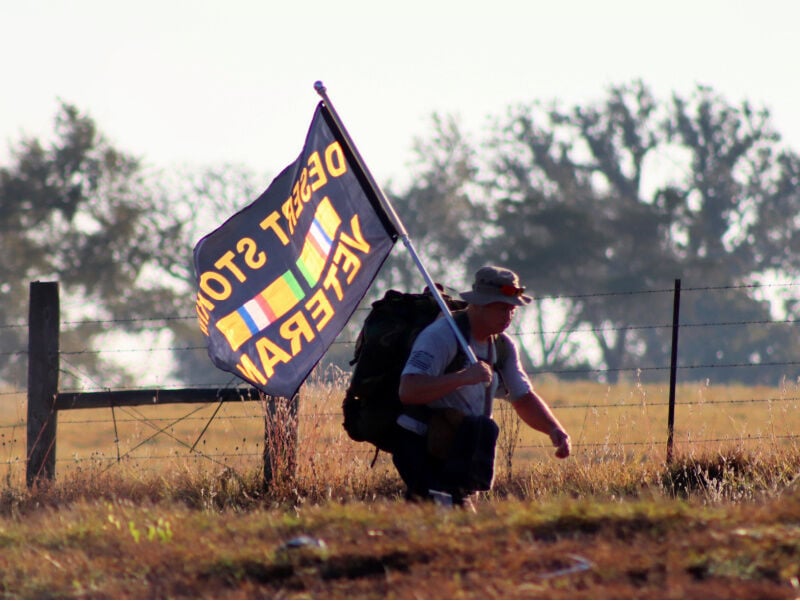 John Mumby's journey of 300 miles from his home in Winnsboro to Austin is raising awareness of Gulf War Syndrome. In this photo he's walking through Anderson county the week of October 3-9. The flag he carries on the journey reads "Desert Storm Veteran." 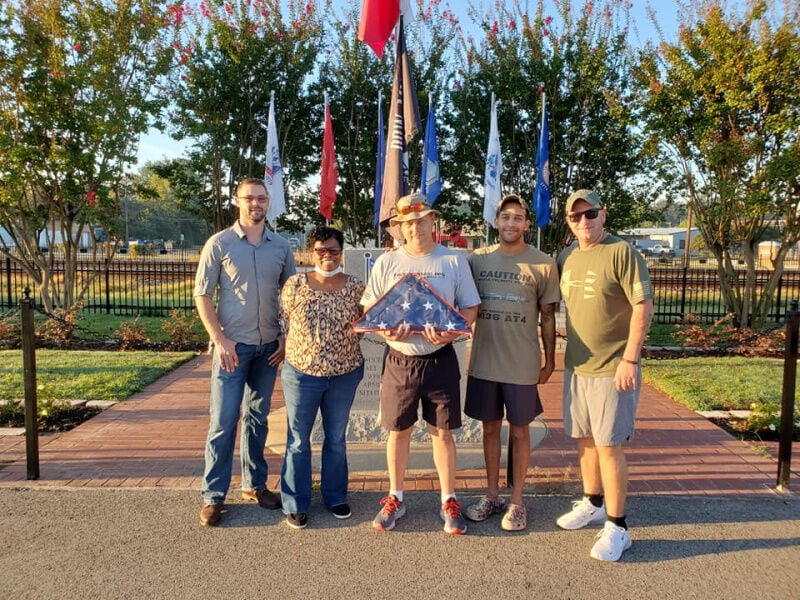 John Mumby (center) meets with supporters in Mineola early in his journey to the state capitol.

John Mumby's journey of 300 miles from his home in Winnsboro to Austin is raising awareness of Gulf War Syndrome. In this photo he's walking through Anderson county the week of October 3-9. The flag he carries on the journey reads "Desert Storm Veteran."

John Mumby (center) meets with supporters in Mineola early in his journey to the state capitol.

Carrying a 45-pound rucksack and walking 20 miles a day, John Mumby is fighting a different kind of battle than the one he fought in Iraq 30 years ago. The Persian Gulf War Veteran is fighting to raise awareness of Gulf War Syndrome in a 300-mile trek from his home near Winnsboro, Texas, to Austin.

Mumby's journey began October 1 and will likely conclude by the month's end. From Winnsboro he walked to Mineola then Tyler along Highway 69, covering between 14 to 20 miles a day.

Mumby reported feeling "exhausted" while walking the 20-mile trek from Frankston to Palestine in Anderson County due to the region's rolling hills. He carried a large navy blue flag with “Desert Storm Veteran” in yellow letters to draw attention to unexplained medical issues he experiences known as Gulf War Syndrome and funds for research into its causes.

Operation Desert Storm was the United Nations' response to Iraq's invasion of Kuwait in 1990. Mumby served 10 years in the US Army and fought in the regional conflict — also called the Persian Gulf War — for about seven months.

“Not too many people remember but it was a chemical war, and that has affected quite a few soldiers,” he said. "The symptoms can be debilitating and I had come down with some of those symptoms myself.”

John Ring of Mineola, Texas, is sponsoring Mumby's walk. He's the founder of Walk for Vets and trekked across the southern US more than 2,500 miles in a months-long journey in 2019 to 2020. Ring is calling ahead of Mumby as he walks and requesting accommodations from communities along the way.

Ring said the walks are raising awareness of veterans' issues such as post traumatic stress syndrome and suicides, which average 22 a day. The two vets participated on shorter walks together before Mumby decided to start his own journey.

Mumby explained that many veterans commit suicide because they feel “out of place.” Another is a lack of treatment options. Mumby is walking to focus on “positive” things and keep his mind busy.

Sometimes others join Mumby as he walks to show their support. Another Gulf War Veteran joined his walk in Frankston and bought him dinner at a restaurant before he stayed the night at a nearby church.

“The overwhelming response is that people are paying attention,” Mumby said. “When people are faced with dealing with someone who has these health issues they understand better how to help.”

Once he arrives in Austin, Mumby hopes to have a small platform.

“I just want to ask people to pressure their senators and their congressmen to push legislation to get the VA to accept and recognize Gulf War illnesses for what they are,” Mumby said.

The University of Texas Southwestern Medical Center is a leader in research on Gulf War Syndrome and accepts donations HERE. For information about Walk For Vets, visit www.walkforvets.org.