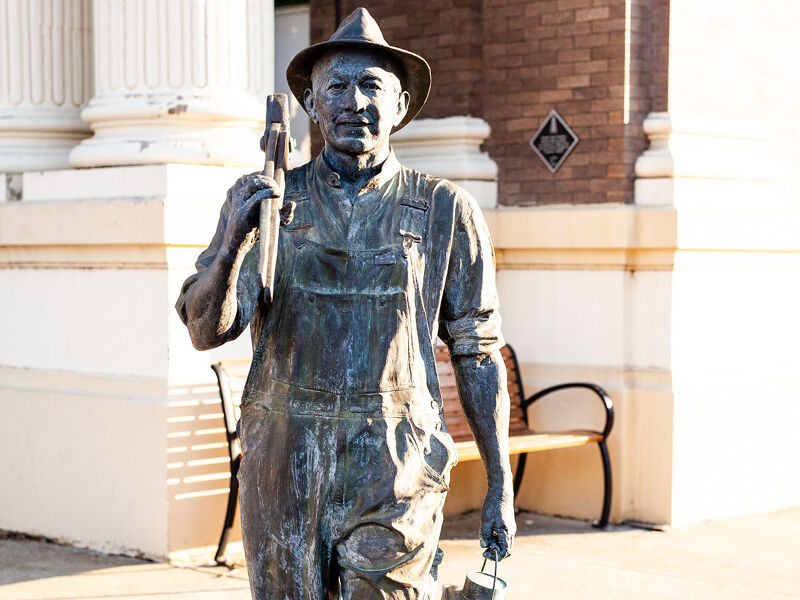 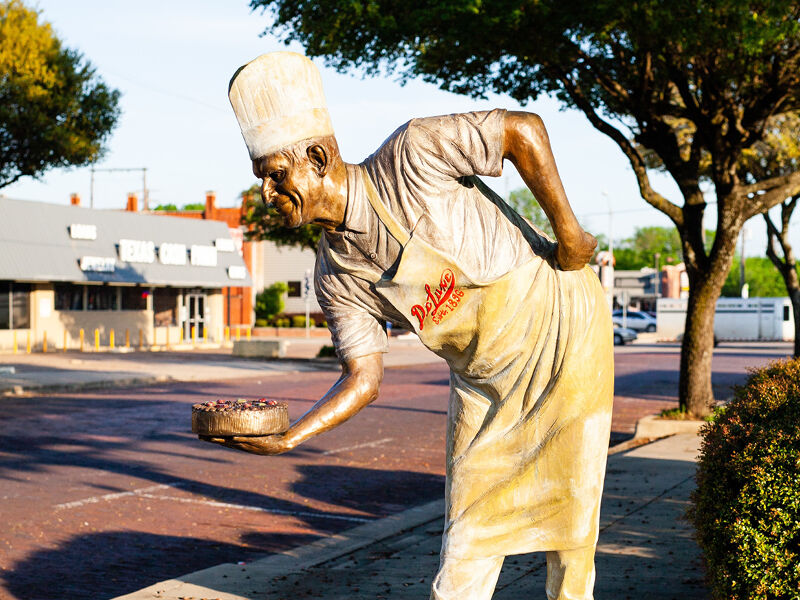 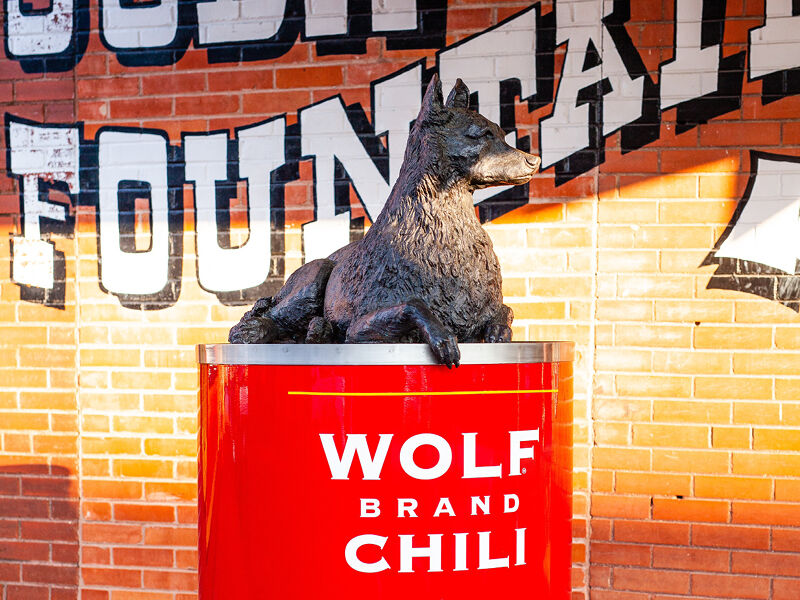 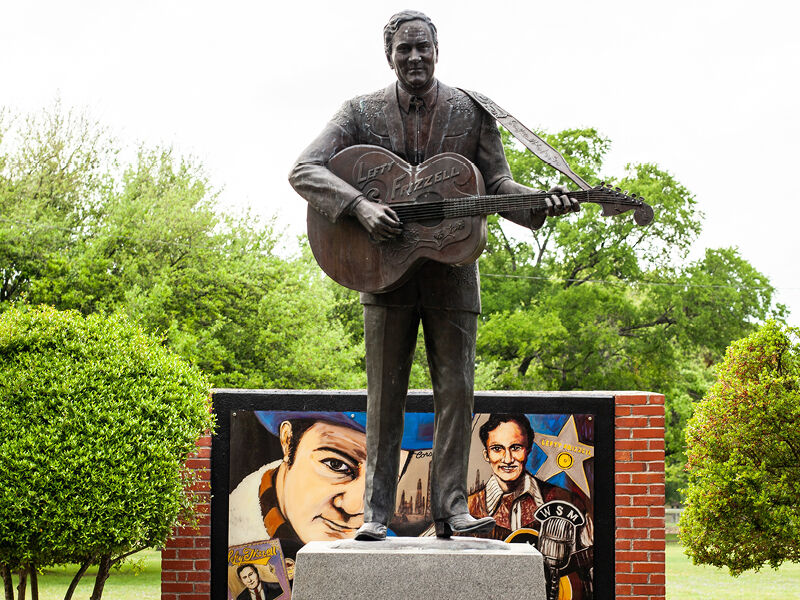 The city of Corsicana extends its hospitality through a unique group of ambassadors who stand throughout the town on street corners and in front of key buildings and memorials — permanently.

Corsicana’s Bronze Sculpture Tour is a life-sized art exhibit that tells stories about the unique individuals who built the city’s history.

Created by different artists, most of the lifelike sculptures interact with the cityscape: an oil field worker appears to cross a street on his way home; a pastry chef leans over to offer a fruitcake to passersby; and a pet wolf guards the spot where its owner Lyman T. Davis first served his famous Wolf Brand Chili.

The statues invoke curiosity while beckoning visitors to learn more about the city’s heritage. Most are located on the streets of downtown, while others are a short drive from the town’s center. All are highly visible and accessible, making Corsicana a tour-worthy destination.

Curious visitors who want to learn more about the figures and their role in the town’s heritage can visit the Corsicana Visitors Center, which provides a map and a narrated audio tour at www.visitcorsicana.com. The center is located at 301 South Beaton Street. Call (903) 654-4850 for information. Visitors can also scan a QR code on each sculpture with a smart phone camera to quickly access the audio tour.

The Oil Field Worker was the first statue officially created for the Corsicana Bronze Tour and pays homage to thousands of men who worked during the city’s oil boom days. Though the city hired contractors to dig for water in 1894, they discovered oil instead. After many more wells were dug, the Magnolia Oil Company — the precursor of Mobil Oil — built the first commercial oil refinery in the West in Corsicana.

Bronze artist Lisa Perry depicts the oil field worker striding home satisfactorily after a full day of work. He carries a long-handled wrench and a lunch pail, two essentials in the field.

The statue is dedicated to all oilfield workers in the region and was commissioned by Joe Brooks of the group Art in Public Places. The E.M. Shepherd Foundation provided funding for the project, which was installed in 2012 at the downtown corner of 6th Avenue and Beaton Street.

Extending a football as if handing it to a player, the sculpture of Coach Jim Acree stands at the corner of West 6th Avenue and South Beaton Street. Acree led the Corsicana Tigers to state football victory in an undefeated season in 1963. A group of former players commissioned artist J. Payne Lara to create the sculpture which was installed in 2017.

Artist J. Payne Lara pays homage to Corsicana’s reputation as “fruitcake capital of the world” with this sculpture of Collin Street Bakery’s 60-year employee Jerry Grimmitt. Holding a life-sized fruitcake, Grimmitt leans over as if offering it to passersby at the bakery’s Seventh Avenue location. The Bill McNutt III Family Foundation commissioned the statue, which was installed in 2018.

Wesley and Lucille Green sold western wear to generations of families for 50 years. They owned and operated a boot and shoe repair shop on West 5th Avenue. The Greens supported youth agriculture projects and the Navarro County Youth Expo. Artist Lisa Perry shows Wesley Green in a work apron repairing a boot outside his shop.

Beloved physician Dr. Kent Rogers served the community of Corsicana for decades in private and public practice. He also supported the city’s education and sports programs, serving on the school board and volunteering on the sidelines at Tiger Stadium on Friday nights. Artist J. Payne Lara depicts Dr. Rogers wearing a stethoscope and a warm smile.

Sower of the Seed

The Sower of the Seed on Beaton Street is a tribute to the farmers of Navarro County. Obe Veldman of Corsicana commissioned artist Lisa Perry to design the statue in the image of his father Lutzen Veldman, who farmed in the Netherlands.

Perry depicts the elder Veldman as his son remembered him — spreading seeds from a bag with an outstretched hand. The bag of seeds features “The Parable of the Sower” from the book of Luke inscribed on its side.

Artist Nancy Rebal created this likeness of Corsicana’s most famous wolf to commemorate the beginnings of Wolf Brand Chili in Corsicana in 1895. That’s when 12-year-old Lyman Davis sold hot chili from the back of a wagon next to the town’s Blue Front Saloon. Lyman named his chili company after his pet wolf, Kaiser Bill, who still guards the original spot.

Artist Tim Harmon portrays Richard “Dick” Aldama speaking into a microphone at Collin and Beaton streets. Aldama served as the voice of KAND Radio of Corsicana for four decades. He wears a pinstripe vest and holds a cane as a tribute to former station owner Richard Parker, who dubbed the station KAN-D LAND.

Officer Brent Thompson became a hero when saving the lives of others from a gunman in 2016 in downtown Dallas. The Corsicana native is memorialized in a bronze statue at Sixth Avenue and Beaton Street. The statue also honors the memory of Thompson’s son William, who died in 2017.

Thompson is depicted writing a mock ticket for two children — one who resembles William — on a notepad with the title “Heaven’s Roll Call.” The sculpture by artist J. Payne Lara was installed in 2019, the same year Thompson posthumously received a Medal of Valor.

A statue of José Antonio Navarro, one of the founding fathers of Texas and the namesake of Navarro County — sits in front of the Navarro County Courthouse at 300 West 3rd Avenue. The sculpture honors Navarro’s role in the Texas Revolution and as a signer of the Texas Declaration of Independence from Mexico in 1836 and the state constitution in 1845.

Navarro County was named in his honor in 1846. As a second honor to the statesman, the county allowed him to name the county seat. He chose the name Corsicana after his father’s birthplace, the island of Corsica near Italy. The state of Texas installed the statue in 1936 during its Centennial.

Corsicana native Candelario Garcia entered the U.S. Army in 1963 and fought bravely in Vietnam in 1968, risking his life for his fellow soldiers. Garcia received the Distinguished Service Cross after the war, but a review begun in 2002 determined that politics and prejudice had prevented him and 23 others from receiving the Medal of Honor.

Garcia died in 2013 and is buried with military honors in the Dallas/Fort Worth National Cemetery. He was awarded the Medal of Honor posthumously in 2014.

A bronze sculpture of two children reading a book in front of the Corsicana Library celebrates the city’s children and encourages their lifelong love of reading.

The children sit side by side with heads bent over, engrossed in reading a picture book. The statue is one of many civic projects for youth sponsored by the Corsicana Kiwanis Club.

The sculpture and small mural behind it stand as a tribute to 1940s and 1950s country singer and songwriter William Orville “Lefty” Frizell and his significant musical influence. Frizell’s songwriting talents came to the fore in 1950 with hit, “If You’ve Got the Money (I’ve Got the Time).”

Wearing colorful boots, fringe, and sparkles, Frizell brought bling to country music performances and is considered the original Rhinestone Cowboy. However, his most lasting impact on the genre was his characteristic twang and emphasis on long syllables, often heard in songs by George Jones, Merle Haggard, and Willie Nelson.

The statue by artists Doug and Sandra McDonnell stands near Corsicana’s Pioneer Village at 912 West Park Avenue, where a small museum displays artifacts from his career.

Bronze artist Lisa Perry poses Stuart Beebe as if watching a youth baseball game in the stands at Corsicana’s Community Park. He leans over the railing, engrossed in the action.

Known as “Mr. Baseball,” Beebe was a local businessman and a devoted volunteer to operations at the park, where he mended fences, brought in sheep to keep the fields in perfect condition, and sometimes called scores over the loudspeaker. Beebe’s name now graces the city’s baseball complex at North 45th Street, built in 2016. The statue was installed in 2018.

Titled “The Invocation,” this 13-foot sculpture is of a Native American offering the skull of an animal as a sacrifice to the gods. Artist Buck McCain of Arizona said the inspiration for the statue came to him in a dream.

Installed in 1990, the statue still stands in front of the Cook Education Center and Pearce Museums on the Navarro College campus at 3100 West Collin Street in Corsicana.

The Cadet Memorial at the Corsicana Municipal Airport honors the city’s significant contributions to World War II. The airport served as an air training center for 8,000 troops from 1941-1944.

Erected in 2009, the memorial includes a bronze sculpture of a cadet wearing a flight suit and parachute as if walking to board an aircraft. The memorial also honors the 90,000 men and women who served in the US Armed Air Forces during war combat operations.