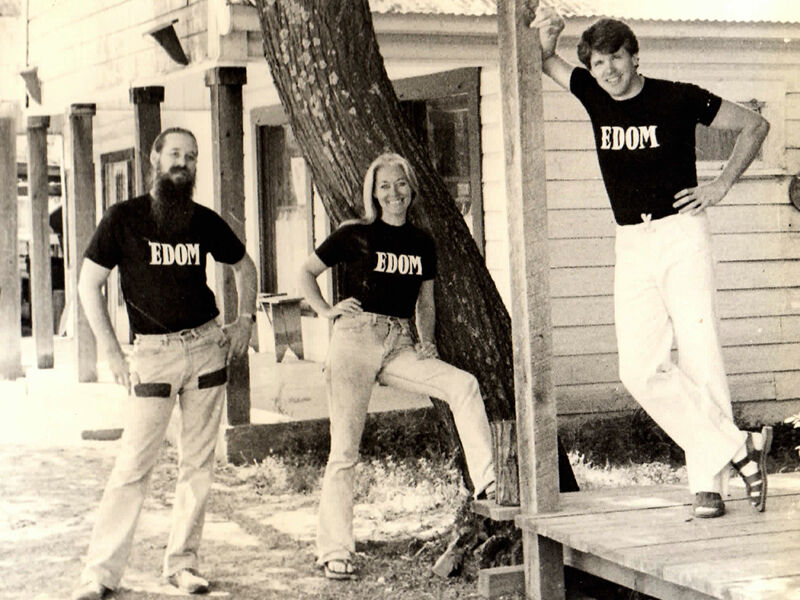 Founders and early movers and shakers of the Edom Arts Community include (l-r) Zeke Zewick, Marty Flanagan, and Doug Brown. Marty and Doug recently passed away leaving the community grieving, but moving forward and continuing their legacy. 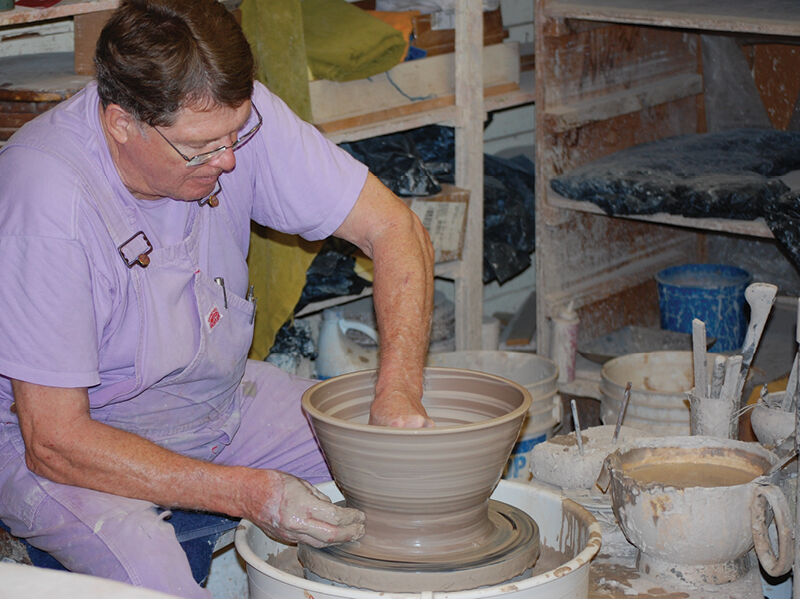 Doug Brown opened Potters Brown in Edom almost 50 years ago and changed the course of the village. He passed away August 2. 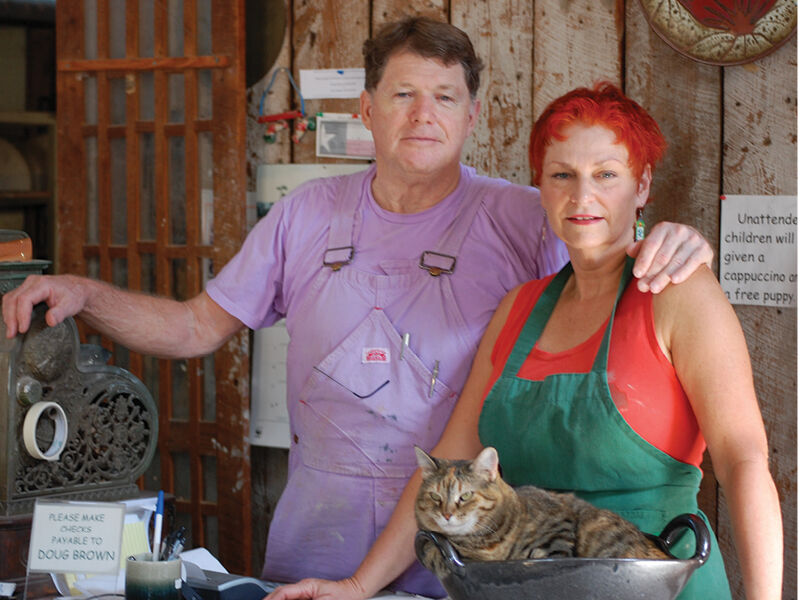 Doug and Beth Brown and Squeaky the Cat in the showroom of their gallery and working studio, Potters Brown. Doug passed away on August 2. 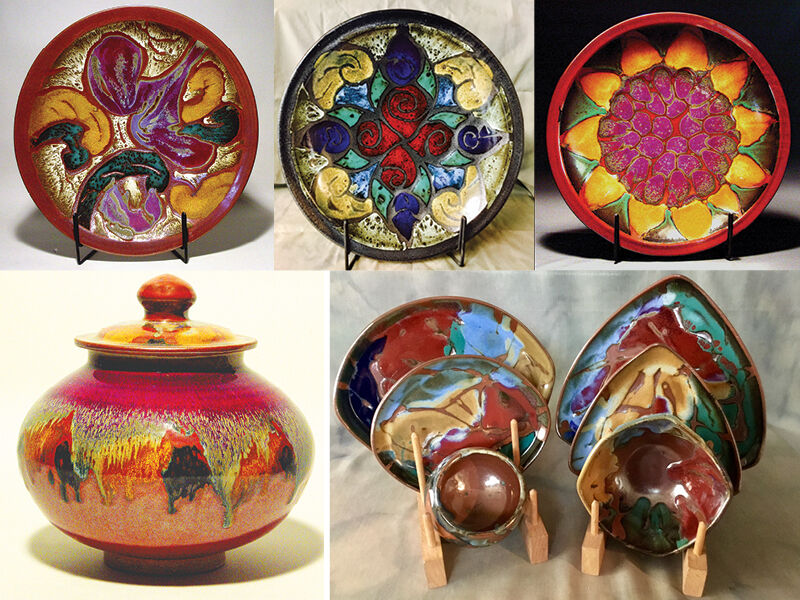 A sample of the pottery created by Doug and Beth Brown from their Potters Brown studio in downtown Edom, Texas. 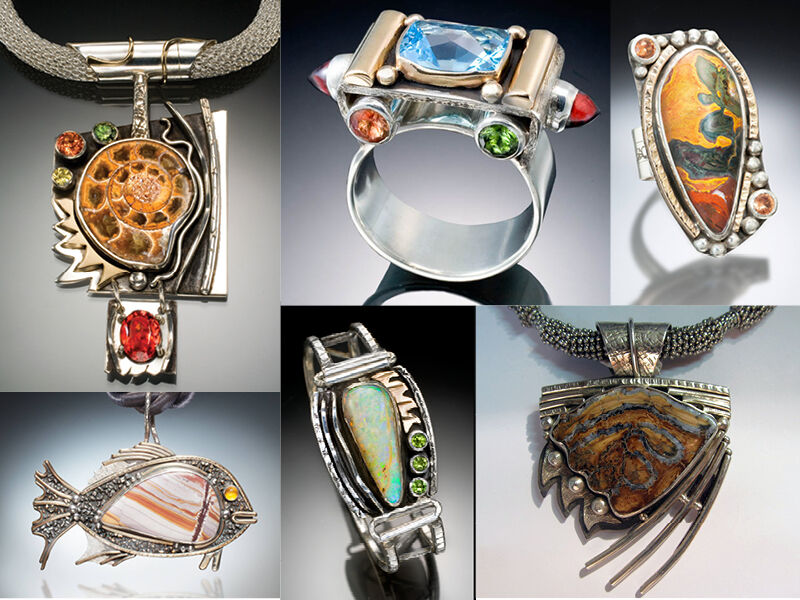 Zeke and Marty created many jewelry designs over the past 45 years or so in their studio in downtown Edom. 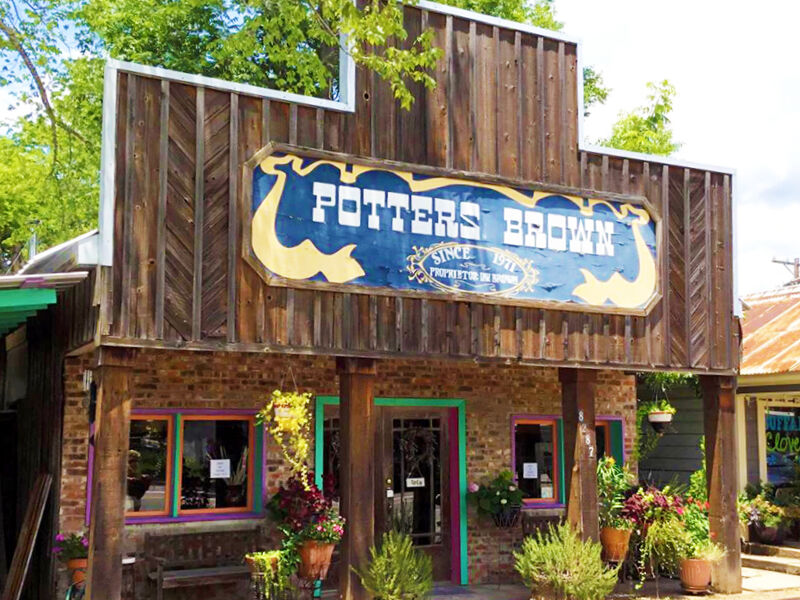 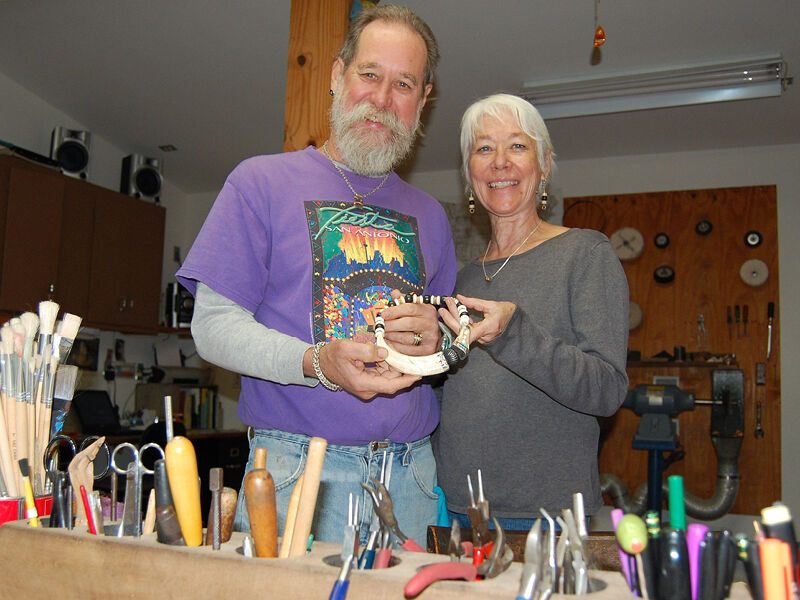 Zeke Zewick and Marty Flanagan show one of their many creations from their studio in Edom. The duo joined Doug Brown in 1976 helping form the Edom Arts Community. Marty passed away on May 28. 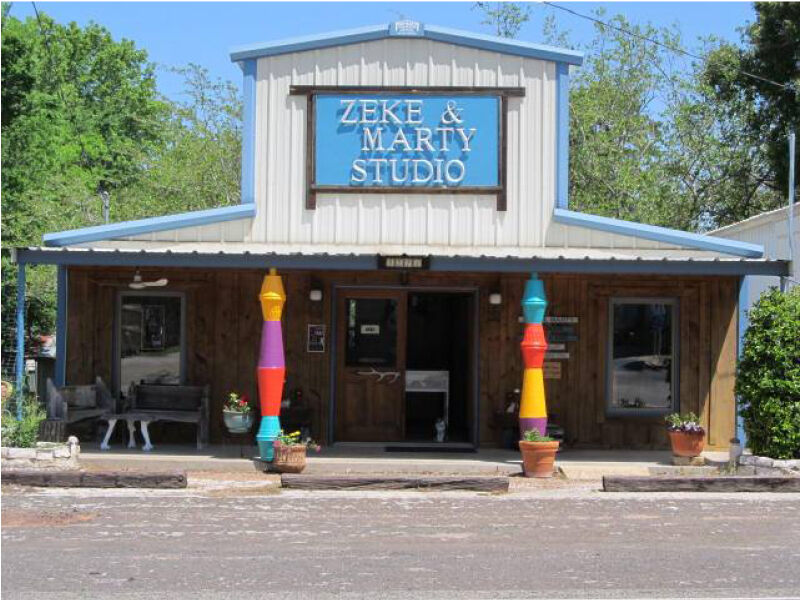 Zeke & Marty Studio is one of the anchor businesses of the Edom Arts Community.

Like many small towns that time forgot after World War II, Edom, Texas — population 250 or so — was nothing more than a dusty spot in the road in the early 1970s.

While a tumbleweed town is unappealing to some, that solitude — in a backdrop of rolling hills and majestic East Texas trees — was a perfect place to land for a visionary artist like potter Doug Brown.

Next year marks 50 years since Doug opened his Potters Brown shop in 1971 along the sleepy downtown Edom main street. He soon started the Edom Art Festival, an opportunity to invite his fellow artists to celebrate and sell their work in a quaint rural setting. They came for the festival and some ended up staying for the long haul like Zeke Zewick and Marty Flanagan who joined him in 1976.

The festival grew to one of the most successful art shows in the state, and the community is known far and wide for its authentic charm with numerous working artists and galleries adding the spark that makes Edom dazzle.

Sadly, this artists’ hamlet is now mourning the loss of two of its founders. On May 28, Marty — one half of the beloved Zeke & Marty jewelry-making couple — passed away after a brief illness. Just eight weeks later, Doug died August 2 after a massive stroke.

As the Edom Arts Community moves forward in continuing Doug and Marty’s legacy, they honor how it all began.

Through the many reports over the years in newspapers, magazines, and on TV shows, Doug told his tales of leaving the big city and nine-to-five jobs behind to follow his dream to do what he loved.

“I wanted to make a living making pots,” Doug said. “It is a total immersion of all the senses — just to see something come from nothing is very exciting.”

He found a few empty buildings in quiet, rural Edom amidst towering trees and knew he was home. He converted an old grocery into a studio. He built a kiln and eventually added a second.

Many of the long-time residents weren’t sure what to make of him. The newest person in town was always the most suspect it seemed. Doug said people wanted to call him a hippie, but he didn’t have long hair and he worked too hard and too long so that confused them.

He worked his clay into pots, glazed and fired them, and hoped customers would show up to buy some of them. As he told it, when people in fancy cars began to stop at the shop and leave with brown paper bags, rumors began. Some people couldn’t figure out how anybody could dig up dirt, spin it into a pot, cook it, and sell it for $20. They thought he was selling LSD.

He said it took a while for people to get used to him and the arts festival.

“When I came here, it was a very sleepy little town. They didn’t much like any kind of changes,” he said. “The first year after we had our festival, town council tried to pass a resolution banning any kind of gatherings. I went to a council meeting and said that’s an excellent idea — telling people what to do on their own private property — because there were some things I’d like to ban on their private property, too.

“A man jumped up and said he couldn’t be told what to do on his property because that was un-American.”

Doug agreed and the motion failed.

Potters Brown earned its place in the community and the locals came to appreciate the annual festival.

In those early years, Doug may have been suspicious to some of the old-timers, but others found him to be a breath of fresh air. Slowly a few local artists began to emerge and sell their wares to visitors as well.

Although many artists came and went, when Zeke and Marty set up shop next to Doug, their places became the foundation of the working artists’ hamlet. Like Doug’s pottery, fans from all over the country faithfully collect Zeke and Marty’s one-of-a-kind jewelry designs.​

It would take one more artist to solidify the team that changed the course of Edom forever. After coming to the art festival in 1991, Beth Brown met and married Doug, and together they continued the Potters Brown legacy for almost 30 years.

Over the years other potters and jewelers — as well as sculptors, painters, weavers, knife makers, glassblowers, blacksmiths, and photographers — had businesses along main street. Still there today is Joseph Hopps, who arrived in 1999 with his whimsical birdhouses, and Jeff and Judy Gottesman bought the old Edom fire station a number of years ago where they feature his original photography and a live music series.

In recent years Edom welcomed Kelli Holmes and The Experience, a multi-use gathering place offering art, live music, yoga, and other classes. It is also home to The Palate Dining Room where Chef Hobbles (Michael Smith) serves his popular culinary treats each week.

The Edom Art Emporium is an ever-evolving center of arts activities sandwiched between the Potters Brown and Zeke & Marty studios. Partners Kerian Massey, Randy Martin, and Trystan Rhys work with more than 30 other artists who display in their gallery, lead classes, and the group holds numerous special events throughout the year. Associate partners Carol Riedel and Mary Long are retired art teachers now enjoying being potters there. These artists appreciate the mentoring they received from Doug and Marty and being part of the Edom Arts Community.

“We’re forever grateful to them for breaking ground to create this community,” Kerian says “Their beautiful artistry and events are a testament to their ability to create something where once there wasn’t anything.”

Randy says both Doug and Marty welcomed the group to the artists’ hamlet and almost every day they each offered advice, kindness, or little gifts. Marty often shared the ultimate neighborly gesture: food. Doug would bring things like a piece of metal he found and ask Randy if he might find it useful in his art.

“They were helpful, good neighbors,” Randy says. “Always encouraging. That’s an example we have to follow when taking care of new artists.”

The current artists in the Edom community admired Doug and Marty’s quality workmanship, dedication, and the way they welcomed artists and visitors from all over the country.

“They set the tone,” Randy says. “That’s a foundation we’re going to have to take up and continue.”

In the minutes before Doug had his stroke, he was sharing that same giving spirit, Randy says. He came to the Emporium to let the potters know about a new tool he’d just made. Even after 50 years of making pots, it wasn’t unusual for him to keep finding new ways of doing things.

This tool helped him measure the thickness of the clay at the bottom of his pots so every one is equal.

“He showed Mary how to use it, with detailed instructions, then left it with her to enjoy,” Randy says.

“That was Doug — creating something new that made things better, then sharing it with someone else.”

Aside from the artists who set up shop, hundreds of artists found their way to Edom, Texas, through the festival, and an estimated half a million people visited one or more times over the last few decades.

Today, even the old-timers appreciate that Edom would be nothing more than a forgotten town that the oil boom and railroads missed if Doug Brown hadn’t decided he wanted to play with mud in the middle of nowhere, then invited his friends to join him. Instead, Edom is forever synonymous with fine art, with beauty, and an infinite energy that attracts others to carry the torch.

Doug once told a reporter that he felt his work was a metaphor for his own life.

Doug and Marty’s lights continue to shine in the Edom Arts Community and through the artists who stand on their shoulders. Their names are carved in the clay and on the hearts of those surrounded by their creations in homes all over the country.

With a sign on the door that says, “Open Most Days, Closed Others,” Zeke is making jewelry at the Zeke & Marty Studio. Although many of his pieces were collaborations with Marty, they each had their own unique styles as well. Now he continues his work and creates Marty’s designs as well.

The Potters Brown doors are closed for now. Beth says once she’s had some time to “dance with every pot” in their gallery and take what she wants to keep, she’ll open up to sell the rest of the pottery she and Doug made together.

Doug and Beth had a working partnership in every sense of the word. They shared the responsibilities of the studio, each making the work, and at this point Beth said she is not physically or emotionally capable of continuing to make pots without Doug.

She is talking with other potters about the possibility of having several of them working together from the Potters Brown studio.

“I would love to continue his legacy,” she says.

This year’s Edom Art Festival is not taking place on the fair grounds due to COVID-19 concerns. Instead, the Edom Art Virtual Show is allowing people to visit their favorite artists online during the month of October. They can view their pieces and make purchases. It’s a great way to get ahead of holiday shopping and support the artists, Beth says.

Keep up with Edom and the art festival on www.VisitEdom.com. Follow Potters Brown and Zeke & Marty Studio on their Facebook pages. Take a trip to Edom, Texas, to see where the Edom Arts Community was born and meet the inspired artists who keep the flame burning.