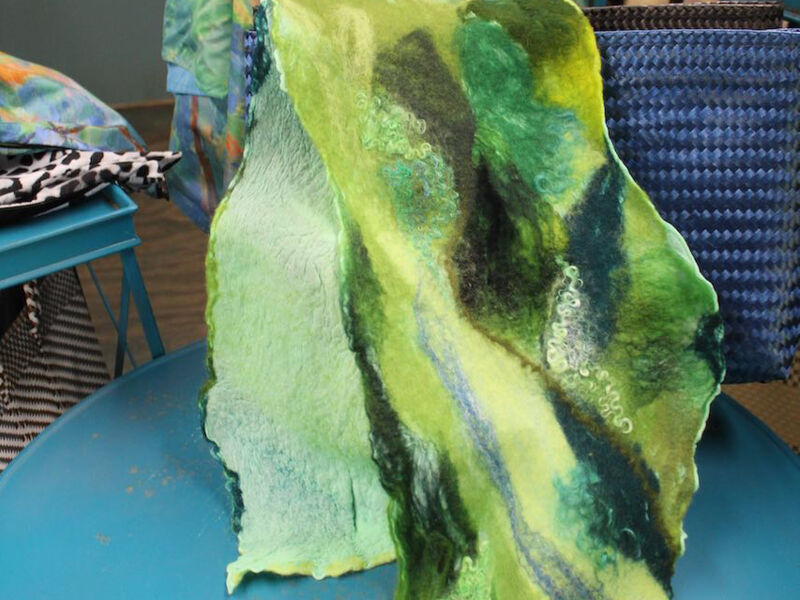 Mary Wilhite makes silk, hand-dyed scarves. Some like this one, she places wool fiber and locks on one side and wet-felts it together. This is called Nuno felting. The fibers lock together when wet, soaped, and agitated. 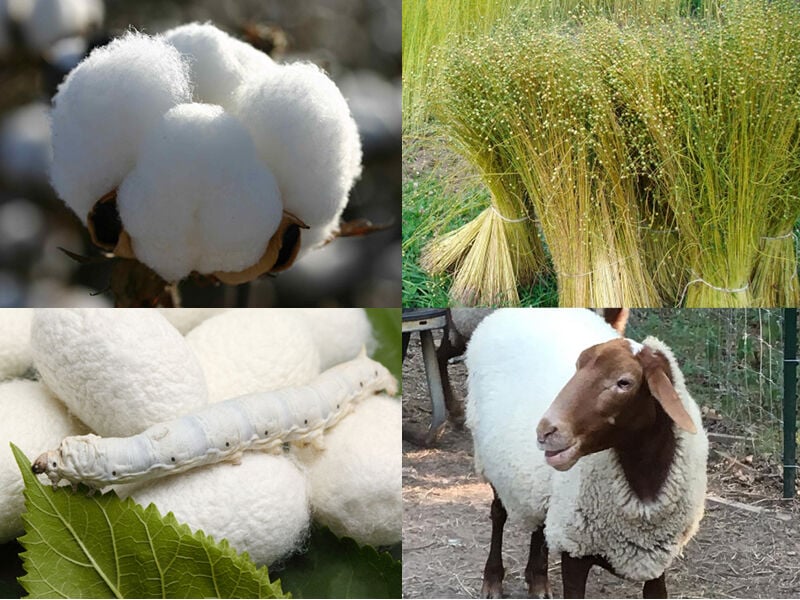 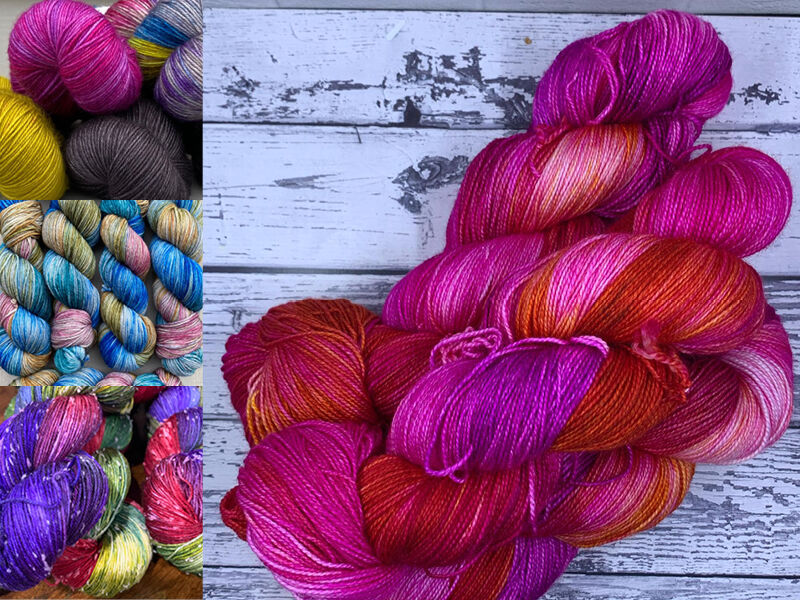 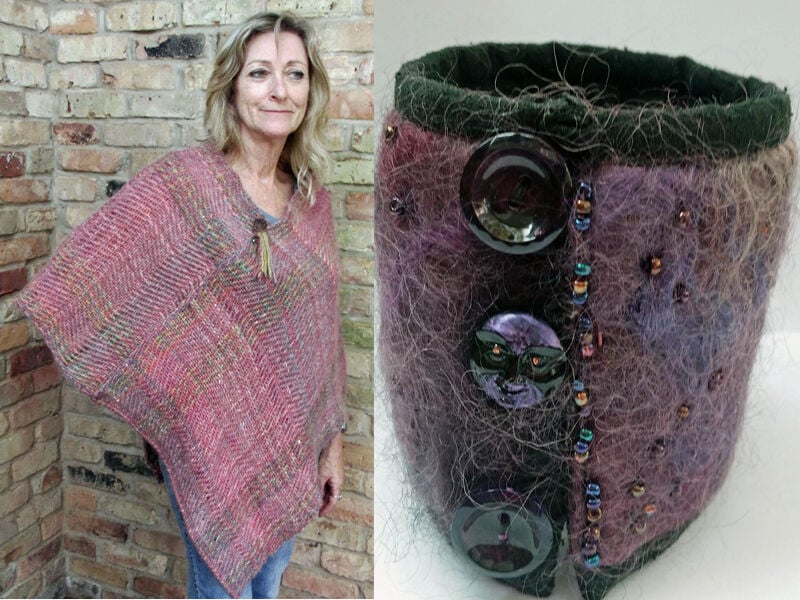 A model shows one of Midge Jackson’s woven shawls. Jackson also creates scarves, and cuffs like this one. Better known as The Pearly Queen, Jackson loves working with natural fibers, from spinning to knitting and weaving and sells her creations on her Etsy site. 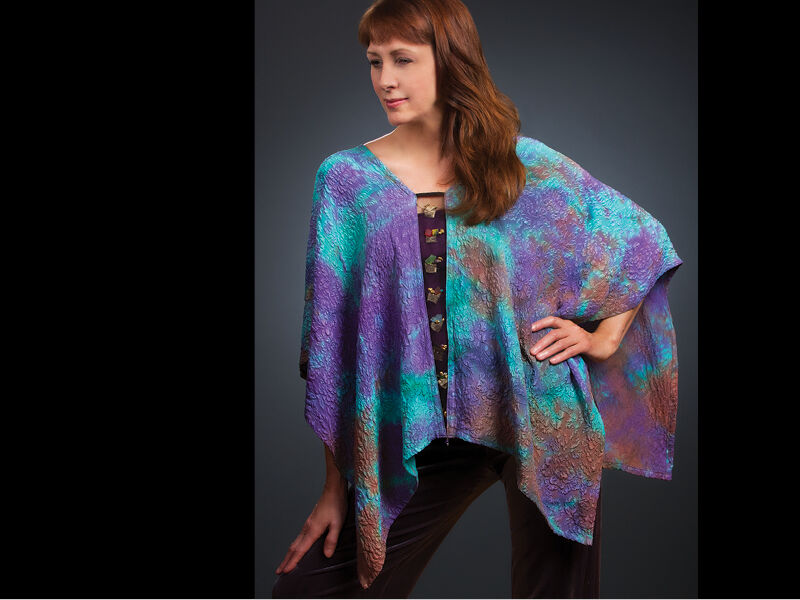 Valerie Guignon of Winnsboro designs clothing she calls “wearable art,” such as this painted silk shawl. 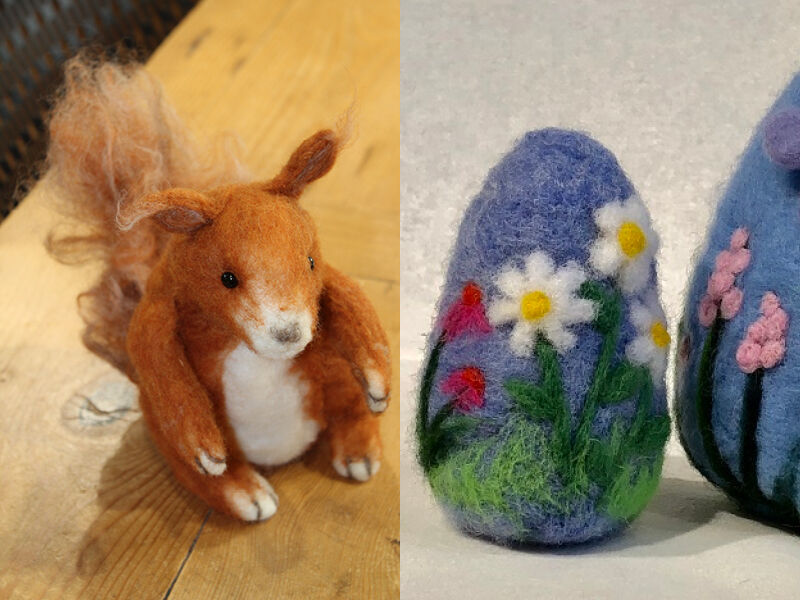 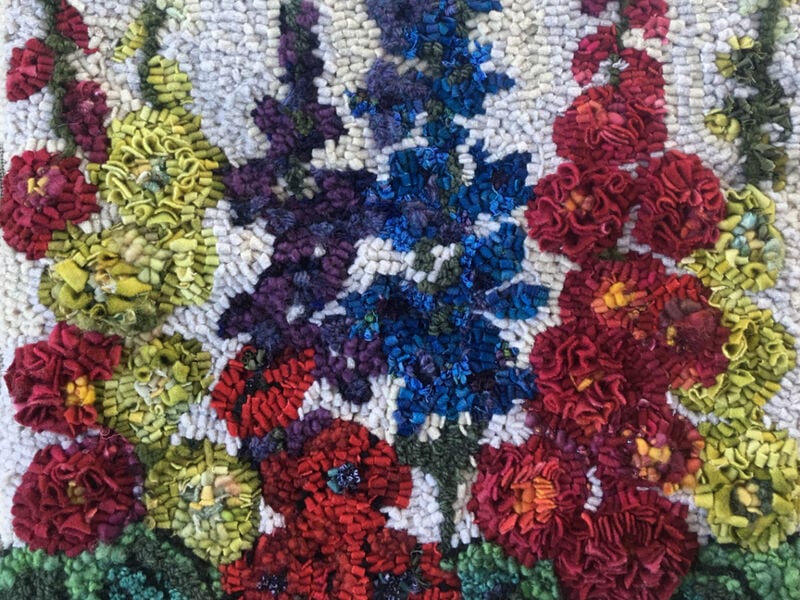 Mary Wilhite makes silk, hand-dyed scarves. Some like this one, she places wool fiber and locks on one side and wet-felts it together. This is called Nuno felting. The fibers lock together when wet, soaped, and agitated.

A model shows one of Midge Jackson’s woven shawls. Jackson also creates scarves, and cuffs like this one. Better known as The Pearly Queen, Jackson loves working with natural fibers, from spinning to knitting and weaving and sells her creations on her Etsy site.

Valerie Guignon of Winnsboro designs clothing she calls “wearable art,” such as this painted silk shawl.

Little did 23-year-old Alyson Gurney of Washington, DC, know that making tiny felted versions of people’s pets would gain her so much attention. She’s an internet success with 50,000 followers on Instagram and is making the TV talk show rounds. People send photos of their pets and she creates three-inch tall felt sculptures using wool with a technique called needle felting. Her business, Little Felted Friends, now has a four-month waiting list even at $80 per mini-pet.

Needle felting is one of many techniques involved in fiber arts that use textiles such as fabric, yarn, and natural and synthetic fibers to create works of art that communicate messages or emotions just like other fine arts. The Upper East Side of Texas is home to many fiber artists, some who even farm their own fibers like cotton from cotton seed pods, linen from flax stems, silk from the spun cocoons of silkworms, and wool from sheep hair.

Carolyn Jones of Chicken Coop Dyeworks in Cedar Hill south of Dallas is raising a small flock of Rambouillet sheep, which grow a long, soft wool similar to their cousins, Merino sheep. She clips the fleece once a year and sends to a mill in the northwest for processing.

Pam Rowlett raises a small flock of California Red Sheep, which she shears, but she has not yet used their fleece in knitting or weaving projects. She says the sheep are red, but their fleece is an oatmeal color with flecks of red.

Keri Gabriele raises angora rabbits and collects their wool for her own knitting projects. She also grows heirloom cotton, which she often combines with angora by spinning them together, which creates a lighter material.

Midge Jackson of Tyler says many people in the region own alpacas and llamas. She sometimes buys their fleece then dyes and spins the wool to create wearable art.

Once the origin product is in hand, the next step involves spinning, knotting, twining, plaiting, coiling, and other forms of treating the fibers to get them into workable material. Then many artists will dye the material to get the colors they want in their finished products.

Jackson — also known as The Pearly Queen — says she loves luxury fibers and works with a range of them in creating hand-dyed yarns and hand-woven outerwear.

She frequently sells the projects in her online store on www.etsy.com at reasonable prices because she loves the feel of the fibers, even if they are time consuming.

“You can never really be paid for the amount of time you put into the project,” she says.

Carolyn Jones dyes a variety of wool and silk fibers, which her clients purchase for weaving or knitting shawls, scarves, hats, and socks. Knitters purchase her yarns because she pairs unique color combinations. Weavers love her silk, using it for the warp of the fabric, since silk is the strongest of fibers, she says.

Wendy Forrest of Amanda Hope Yarn in Nacogdoches began dyeing her own wool when she could not find the muted, sophisticated yarn colors she wanted to use for knitting. After visiting a dyer’s shop in Ireland, she brought home her new knowledge and began experimenting with dyes in her own kitchen.

Forrest’s online business has grown rapidly. She offers a unique way to add fine art to fiber arts. She sells Advent kits of yarn with 25 mini-skeins (rolls of yard), one for each day of the season leading up to Christmas Day.

Last year’s series featured the colors of paintings by Edgar Degas. The 2020 Advent series features colors from the seven Unicorn Tapestries which hang in the Met Cloisters inside the Metropolitan Museum of Art in New York City. The 25 colors offer surprise and inspiration to knitters, who appreciate the designer, hand-dyed colors.

“Everyone likes the idea of having something that’s hand-crafted rather than mass-produced,” Forrest says.

Melanie Sanford of Conserving Threads in Dallas also sells on www.etsy.com. Sanford sells plant fibers, including cotton, hemp, flax, and nettle. Until hemp is more widely available locally, Sanford is buying it from a collective farm in Europe. She says hemp is a stronger fiber and stiff at first but softens during washes and use.

Sanford sometimes sells raw fibers in sample boxes, so fiber artists can experiment working with them and see what they like. She also dyes some of the fibers, preferring to use natural dyes like indigo and marigold when they’re available.

Sanford also sells yarn salvaged from old sweaters bought in second-hand shops. She first takes apart a sweater and unravels it then washes the yarn in a plant-based detergent and re-skeins it. The natural fibers may be wool, cotton, linen, or a mixture.

Often, the sweaters are out of style and may not be used again, so salvaging the yarn gives it new life. She sells each sweater as one bundle, which gives other fiber artists the opportunity to dye over the original color.

Mary Wilhite of Heart Felted Style at Blue Moon Gardens in Edom says felting is her favorite fiber art and like Alyson Gurney she enjoys creating animals as well as many other pieces which she sells at Blue Moon Gardens in Edom. Needle felting involves sewing wool fibers together by poking them with a barbed needle. Each project takes on a form as the crafter adds new features with additional layers.

She teaches felting classes at Blue Moon, and says felting is a good project for beginners. She also creates wall hangings by laying pieces of felt side by side while making a pattern or design. Wool and silk are the only materials suitable for felting.

“Fiber art is really good for people who like tactile crafts,” Willhite says. “It’s soft and involves quite a few of your senses. A lot of people get joy and interest out of that.

Smith uses natural wool fibers, chiffon, or sari silk. She cuts wool fabric and silk into strips to create a bulky look. Assembling a rug begins with a woven linen backing with large holes. The backing serves as a canvas.

Smith draws a design on the linen and hooks wool yarns or fabric into the holes. She prefers to make small rugs because they sell more quickly. People typically use them as wall hangings or pillows, however.

She also teaches classes in rug hooking at Blue Moon Gardens. Beginners can finish a project in one class then sign up for a more advanced class.

“Once you learn the one technique, you’re ready to go on to another class,” Smith says.

Smith estimates hundreds of people in the Upper East Side of Texas practice fiber arts.

“Everyone has the ability to create art, as long as you can find the niche to make you happy,” she says.

Valerie Guignon, who lives in Winnsboro, designs a variety of silk clothing. She hand-paints and designs silk “wearable art,” including tops, ponchos, kimonos, and scarves, which sell in boutiques nationwide. She also designs decorative items such as silk lamps, metal and glass sculptures, handbags, and decorative fiber art collages.

Boutiques in the Upper East Side of Texas featuring Guignon’s fiber arts include Clara Ida Frances and the Winnsboro Center for the Arts gift shop in Winnsboro and The Experience in Edom. The Dallas Arboretum and Botanical Society also sell her creations. Learn more about Guignon’s creations online at www.guignon.com.

Some of these artists meet up with others from around Texas and the surrounding states in the East Texas Fiber Fest held annually in Lindale or Canton. This year, the festival is taking place virtually. The East Texas VirtuWool Festival takes place November 20 and 21.

Organizers Pam Rowlett and Keri Gabriele are hosting around 30 vendors, with many teaching classes and leading discussions on Zoom and YouTube. The Zoom sessions allow clients to interact with instructors by asking or typing questions, and streamed videos are accessible to a wider audience.

“We want to be a source for Texans to find other fiber artists and fiber makers,” Gabriele says. “It’s about showing Texas to the rest of the world, that we know how to knit, too.”

This year’s VirtuWool festival is open to everyone and visitors catch a glimpse of the many artists who create beautiful, wearable and decorative designs throughout the year. Many get their fiber arts start at festivals like these and the seasoned artists offer sage advice to beginners.

“The festival is accessible to anybody,” Midge Jackson. “Even people who aren’t into spinning and weaving like to come, and they find it very interesting.”

For more information about the East Texas Fiber Festival, visit their Facebook page or www.easttexasfiberfestival.weebly.com.