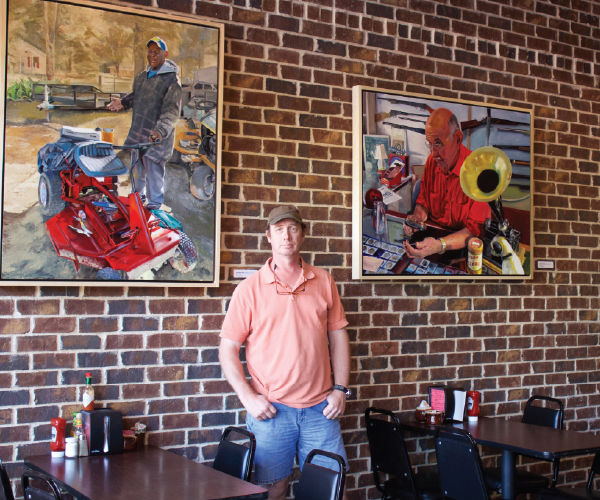 Artist JD Cole stands beside some of his paintings of local residents at Dolli's Diner in downtown Nacogdoches including Billy Douglas, “The Mow Man;” Ken Wood, “The Stuff Broker;” and Carey Blanchard, “Leather Carver.” 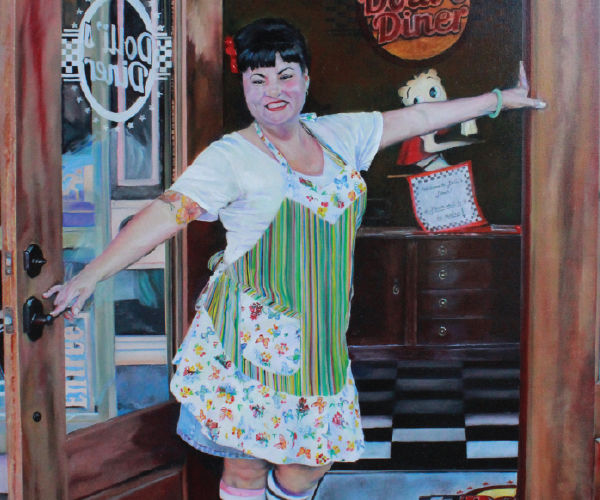 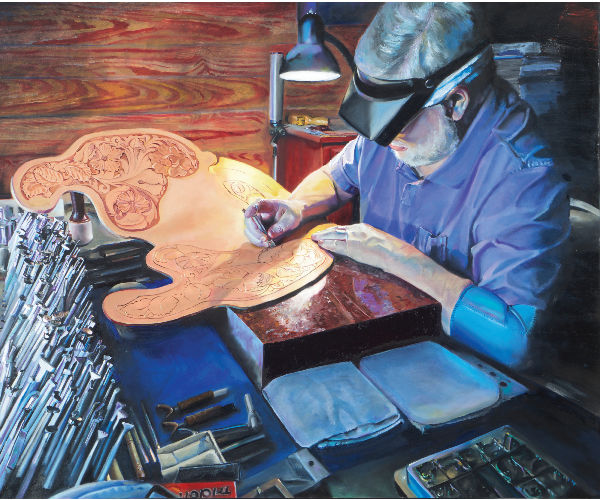 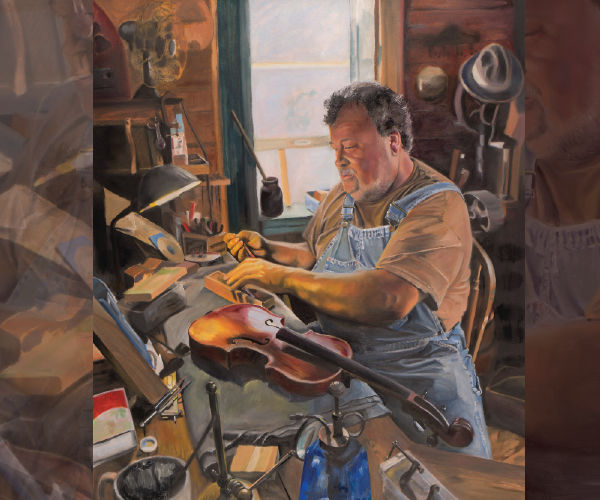 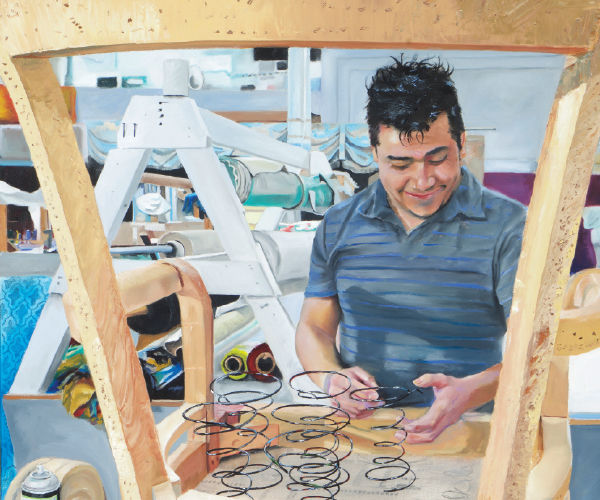 As guests enter Dolli’s Diner on Pecan Street in downtown Nacogdoches, they are greeted by a stunning display of large, colorful, expressive portraits along a brick wall. Created by artist JD Cole, the paintings are Nacogdoches people in scenes that reflect their lives in Texas’ oldest city.

"That beautiful, blank brick wall just begged for some art," Cole says of the time when he first visited the diner, so he offered to provide paintings and the owners, Dolli and Steven Geyerman, agreed. "Their desire was to focus on people and events specific to Nacogdoches. Since my paintings were of local and downtown folks, it was a perfect fit."

One of the paintings is "Ms. Dolli" herself, gracing the doorway of her diner in a multi-colored striped apron with black-and-white-striped socks, inviting folks in to what promises to be a fun and delicious dining experience.

Other local characters that grace the brick wall or were commissioned by Cole at some point include "Restoration," an unknown worker at Greer’s interior design store in downtown Nacogdoches; "Oldtime Traditions" and "Oldtime Musician" featuring Steve Hartz in his shop at the General Mercantile & Old-time String Shop; "Stuff Broker" Ken Wood of Ken’s Antiques; "Leather Carver" Carey Blanchard with B4 Custom Leather working on a detailed project; small engine repairman Billy Douglas in "The Mow Man;" and the "Quilter" Bobbie Soloman from Nacogdoches Treatment Center.

"Red Dress," featured on the cover of this issue, is a portrait of Cole’s daughter Jessica.

"As I began classical realism portraiture painting, I was advised to know who of the masters inspire my style. That was easy," Cole recalls. "I especially enjoy works by Michelangelo, Caravaggio, and John Singer Sargent. Sargent’s painting, ‘Portrait of Madame X’ (1884), directly inspired the composition and idea behind ‘Red Dress.’"

"Red Dress," along with the Nacogdoches pieces, are part of a series of 10 paintings surrounding the concept of "Material Identity."

"Material Identity," Cole explains, comes from a concept common in many art studies called "Material Culture." Historically, artists were encouraged to observe life going on around them and express it in fresh, new ways.

"A number of contemporary artists across several mediums take this approach and many also attempt to mesh the modern with the past," Cole says. "I took hold of this concept and morphed it a little to fit what I was trying to do, calling it ‘Material Identity.’

"I have always been a storyteller and collector of stories. Now I add painting to help tell the stories. The material objects, the collections, and tools that people amass in a lifetime help to tell their individual stories. When you look at all these elements together they help define who a person is and make up a person’s material identity which includes how persons perceive themselves and how others identify them, like what they are ‘known’ for. Often the materials surrounding a person sort of set the stage for the life story."

Originally from Oklahoma, Cole met his Nacogdoches-born wife, Melanie, 30 plus years ago and the couple took up residence in her hometown. In 1991, they went on a two-year adventure to Alaska that’s still going on today. He teaches art and coaches in Alaska public education. They always returned to Nacogdoches during summers and holidays over the years before moving back semi-permanently in 2013.

"At the moment I split my time between Nac and Alaska as I finish up a commitment there," Cole says, adding that he will continue to spend part of the year in Alaska and part in East Texas for a long time to come.

On his website, Cole says he is inspired by times, traditions, and crafts of the past — items that risk being lost in the modern-day world. He seeks out unique individuals and subject matter that follow a person’s journey into their material identity. He explores the costuming efforts and experimentation of the young to middle age, where focus is often grounded in an occupation, and on through the deep-rooted traditions and passions of a lifetime.

"My favorite part of working on portraits is getting to spend time with the person and getting to know more about their nature, personality, and passions," he says. "I feel that experience completely changes the way I portray them in paint."

He’s a perfectionist, and often calls on his subjects to help with final tweaks to the work.

"Often with a commission, I ask the customer to spend time with the completed painting to determine if they see the essence of the person in the portrait. Several times I have gone back to a painting to adjust eye color or the quirk of a smile to achieve just that perfect touch."

Dolli’s Diner is certainly brightened up by the lively paintings and the spirit of the Nacogdoches people Cole has captured in paint.

"I love intense contrast gained through lighting options and color choices," he says. "For portraits depicting material identity, I especially look for settings and background images that enhance and help tell that person’s particular story and passions. In all cases I am a fan of capturing the subject candidly and a little bit unaware of the presence of the camera."

In 2015, Cole was a finalist in Texas National Juried Exhibition in Nacogdoches and a second-place winner in the SFA Art Alliance 32nd Annual Art Show. He was also a featured artist in an SFA exhibition and had a memorable evening there.

"My absolute favorite experience (with portraits) happened at my exhibit at SFA. I had 10 portraits of local people in the gallery and through the course of the evening every one of those people came and stood in front of their own image. There was such a strong sense of community present. Many brought family members, some wore the same clothes as in their painting, and in all cases they just came, stayed, and visited with each other and about the art. It was a very surreal experience and hard to express the feelings it created for me."

Cole intends to continue exploring images on the theme of people engaged in their material identity. He and his wife have an interest in Alaskan Native culture and will spend time soon in village settings to document the traditional ways of life there. He’s currently working on a portrait of the late SFA faculty member Dr. Robert Gruebel and has a few more East Texas characters in mind to capture their essence and tell their stories in lively colored strokes of paint.

Get your digital magazine delivered straight to your in box.