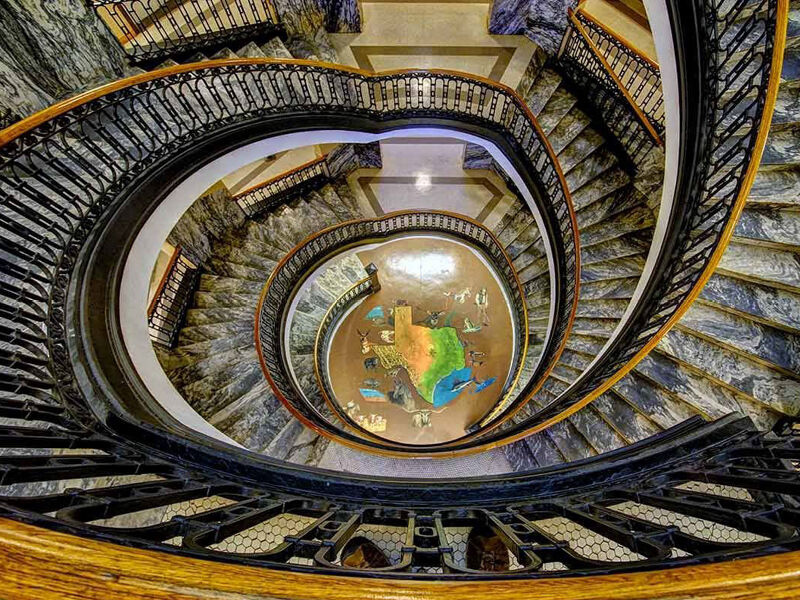 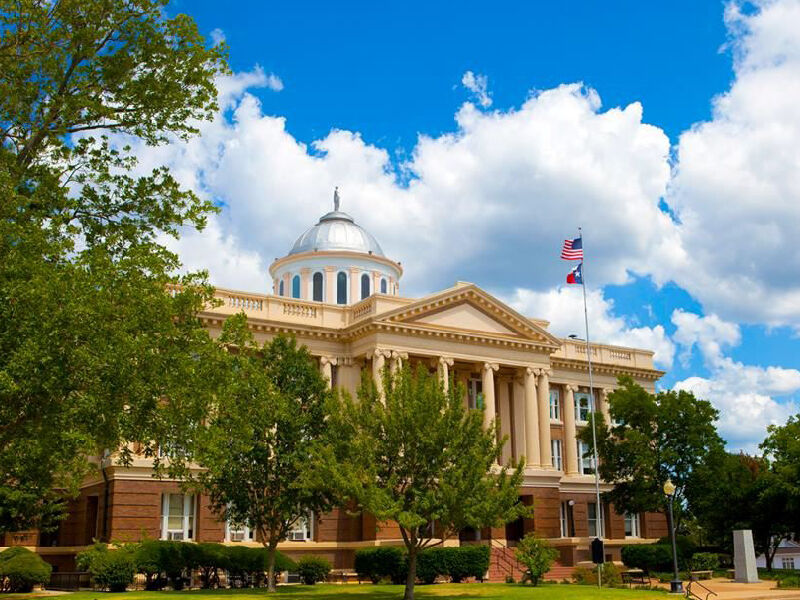 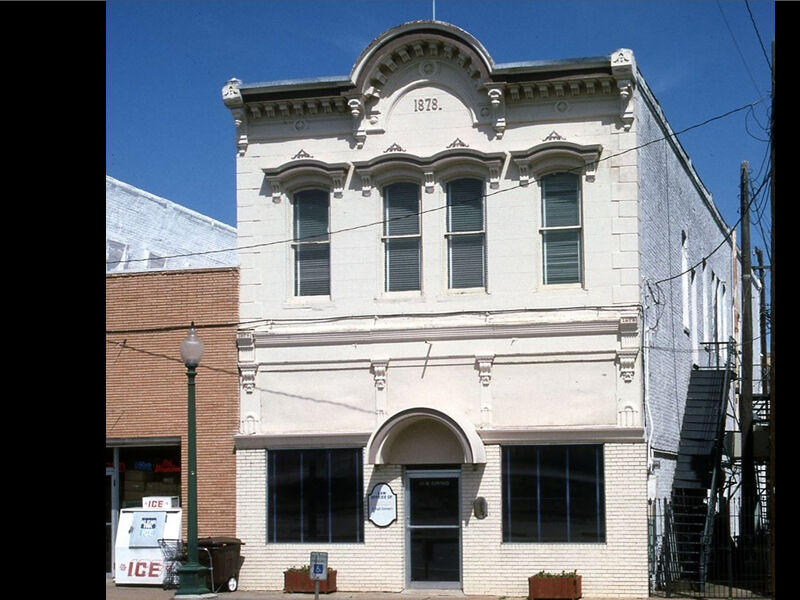 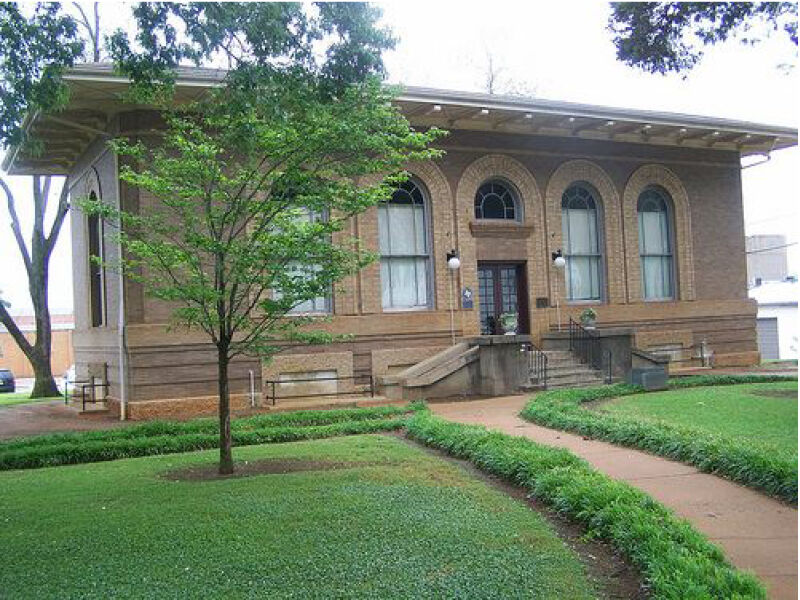 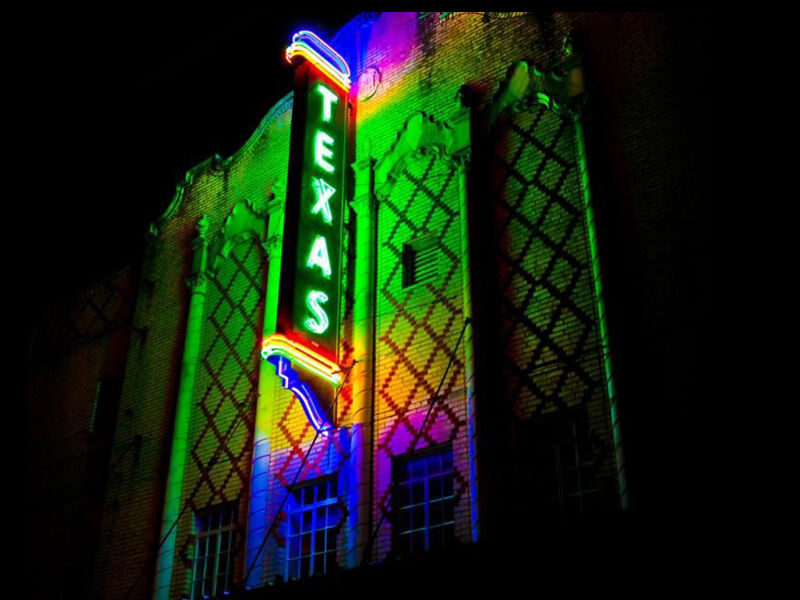 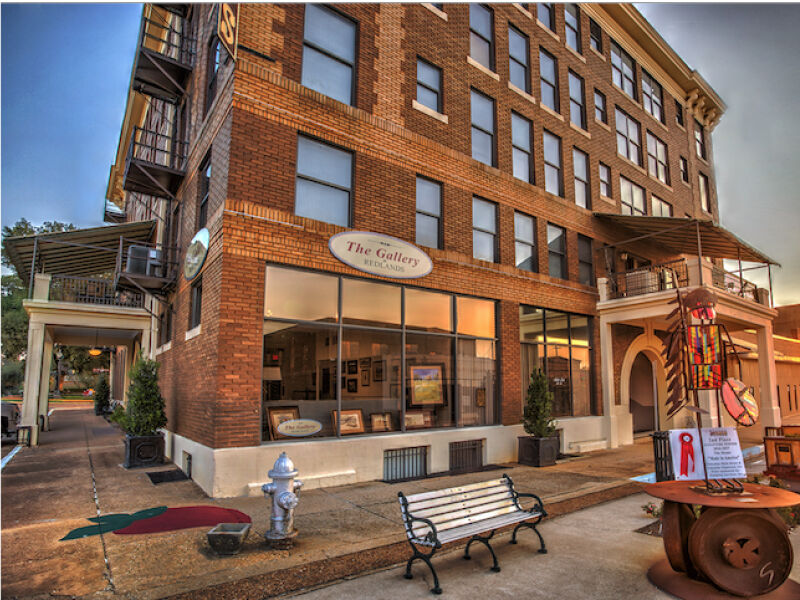 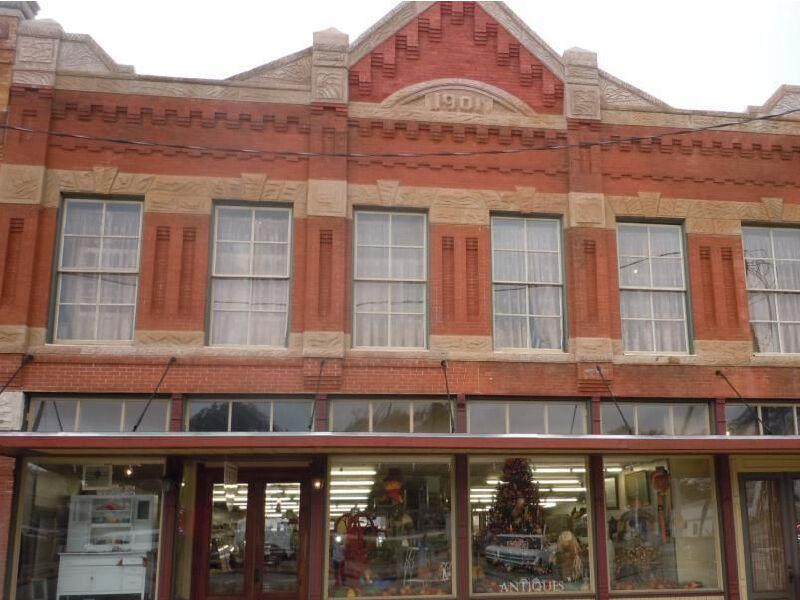 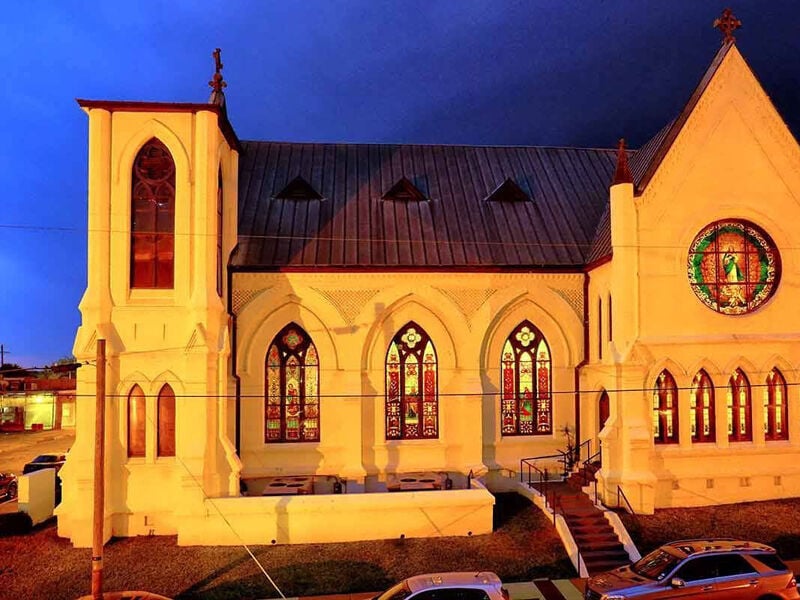 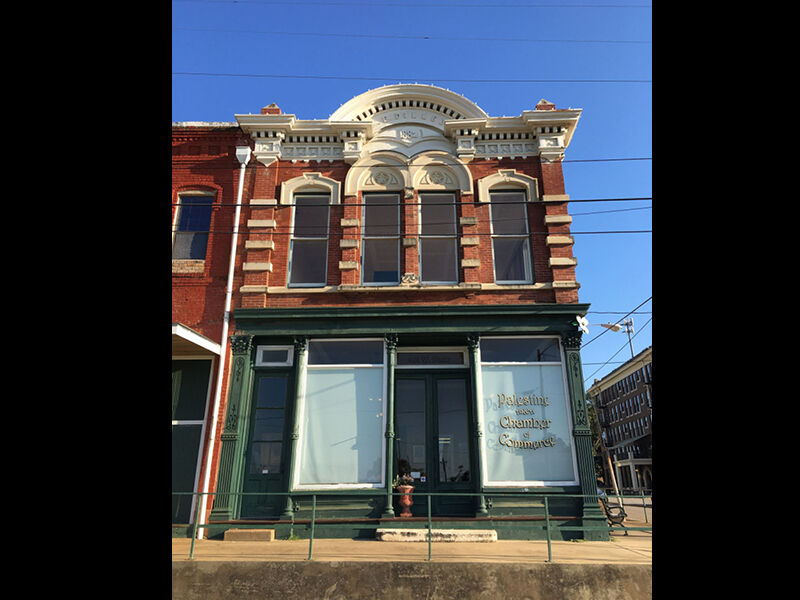 When it came to town in 1872, the railroad spurred Palestine’s growth and left a broad impact on the town’s history and building styles. It served as an artery from larger metropolitan areas, drawing thousands of newcomers, new money, and skilled laborers capable of building enduring public and commercial structures, churches, and private residences with solid foundations and ornate embellishments.

Today, Palestine’s Main Street District is a vibrant economic area along 34 city blocks that parallel the Union Pacific Railroad line. A walking or driving tour of the district is a perennially worthy attraction — and well worth the trip.

George Dilley, a prominent Palestine businessman, built the Dilley Building in 1882 with cast iron entry sills, windows with ornate arch accents, and elaborate cornices with Corinthian columns. The earliest business there may have been a shoe and boot shop, from 1890-1894, followed by a variety of others.

A restoration project in 1993 allowed it to become the new home of the Palestine Area Chamber of Commerce. The Dilley Building is listed on the National Register of Historic Places. The building is open 8:30 a.m. to 5 p.m. Monday through Friday. Contact the office at (903) 729-6066 or visit www.palestinechamber.org.

Decorative features include stained glass from Italy and France, a painted interior dome, and a Pilcher pipe organ. The interior features plastered walls and fixtures built of oak, pine, and marble.

The church was a key structure in Palestine’s history, providing a place of worship, ceremony, and celebration for the town’s working class immigrants. The church still plays a vibrant role in the community and offers daily services in English and Spanish, which are free and open to the public. Call (903) 729-2463 or visit www.shpalestine.org for information.

Built originally in 1885 after the International & Great Northern Railroad came to Palestine, an exterior remodel in 1901 added columns and a parapet with stylish brickwork. The building housed Sam Lucas’ mercantile store, which sold Studebaker buggies, among other items. The store featured a freight elevator used to move buggies to the second floor.

Today the building is home to Duncan Depot Antiques, which carries sturdy furnishings from the 19th and 20th centuries. The store is open for business 10 a.m. to 5 p.m. Wednesday through Saturday. Call (903) 724-0402 or visit www.duncandepotantiques.com for information.

In March of 1915, The Redlands opened in Palestine with fanfare and excitement as the finest Texas hotel outside Galveston. The building features tile floors by Italian artisans, a magnificent stained glass skylight, a spacious outdoor balcony, and an ornate dining room. The Young Men’s Business League pooled their resources to build The Redlands Hotel to attract visitors and businesses to downtown Palestine. The group is said to have built the hotel almost entirely of concrete to resist destruction by fire.

The Redlands entertained guests and gatherings for just four years before the International & Great Northern Railway purchased it to house the company’s headquarters from 1919 until 1956, when the company moved to a new building at 300 Bowers Street, owned today by Union Pacific Railroad.

The former office building sat vacant until 1976, when investors purchased it and began a 35-year process of restoring its original purpose as the region’s prime hotel. Today, The Redlands is a multi-use building with a restaurant, shops, an art gallery, hotel suites, apartments, and commercial offices. For information, call (903) 729-2345 or visit www.theredlandshotel.com.

Just a block east of the Carnegie Library is the Texas Theatre. Built in 1930 with Spanish colonial architecture, the theater opened as an atmospheric movie palace, the most expensive in Texas at the time. It formerly featured an organ that played background music to accompany silent films. The building survives today despite two fires and a series of closings and openings.

After extensive renovations, the theater reopened 25 years ago as home of the Palestine Community Theater, a volunteer organization that stages four to five vibrant, family-friendly performances throughout the year. Auditions are open to the public, and tickets are $15 or less. For information about the theater and showtimes, visit www.thetexastheater.com

Palestine’s Carnegie Library was one of more than 1,600 Carnegie libraries erected by the former steel magnate, Andrew Carnegie, across the United States. His foundation granted $15,000 toward construction of the new public library, which opened in 1914.

Like other Carnegie libraries, Palestine’s features symmetrical plans and a classical exterior. The building served as Palestine’s central library until 1986, when the building’s wooden floors could no longer support its growing collection. The city moved the library to the Alamo School Building on Cedar St. in 1986, but the library moved again in 2011 to the Palestine Mall.

The Carnegie Library in Palestine is one of just 13 remaining Carnegie Library buildings in Texas, but only four are still in use. The building became a Registered Texas Historic Landmark in 1970. Today, the library’s mall location is temporary, according to some city leaders.

Real estate developer Martin Hinzie built one of Main Street Palestine’s earliest structures in 1878. The building retains most of its original facade, especially on the second floor, featuring a detailed parapet and other embellishments from the Victorian Italianate style.

The Hinzie building is considered the oldest commercial building in Palestine to retain most of its original facade. The interior, however, was remodeled without retaining its historic charm, and is not open to the public.

With a short walk or drive from Palestine’s Main Street District, visitors can easily reach the town’s original center, and the grandest building in the county, the Anderson County Courthouse. Sitting atop one of the area’s highest locations, the courthouse is visible from many points in the city.

Built in 1914 of brick and limestone for $150,000, the courthouse features both Classical Revival and beaux-arts architectural styles. The four-story building features a double-spiral staircase with ornate iron handrails that leads the eye upward to a stained glass dome. On the downward journey, a large floor mosaic illustrating Texas’ geographic features offers an aesthetic interlude.

The original Anderson County Courthouse was a one-story timber structure built in 1847. Two other courthouses followed, in 1847 and 1886. The second courthouse fell into disrepair after 30 years and was demolished; the third burned in 1913 at the hands of arsonists.

For more information about the city’s commercial architecture, stop by the Palestine Visitors Center at 825 W. Spring Street or call (903) 723-3014 or visit www.visitpalestine.org.