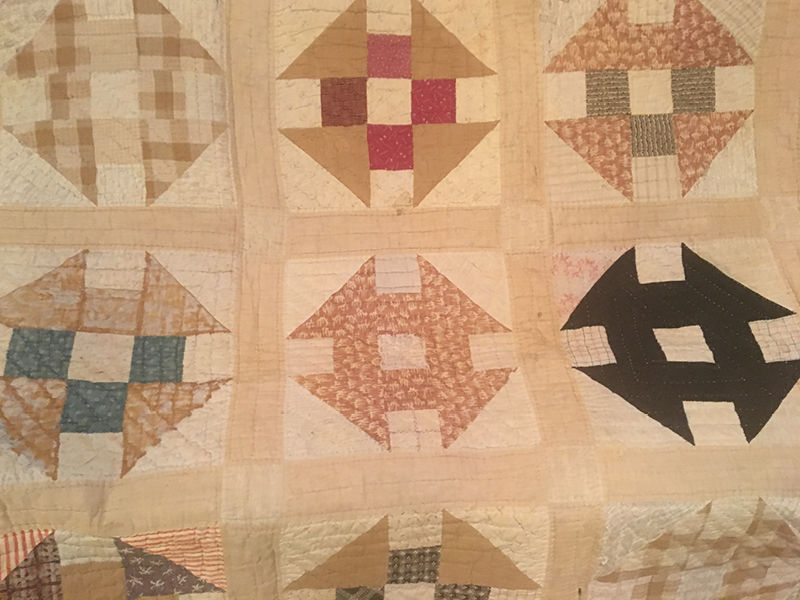 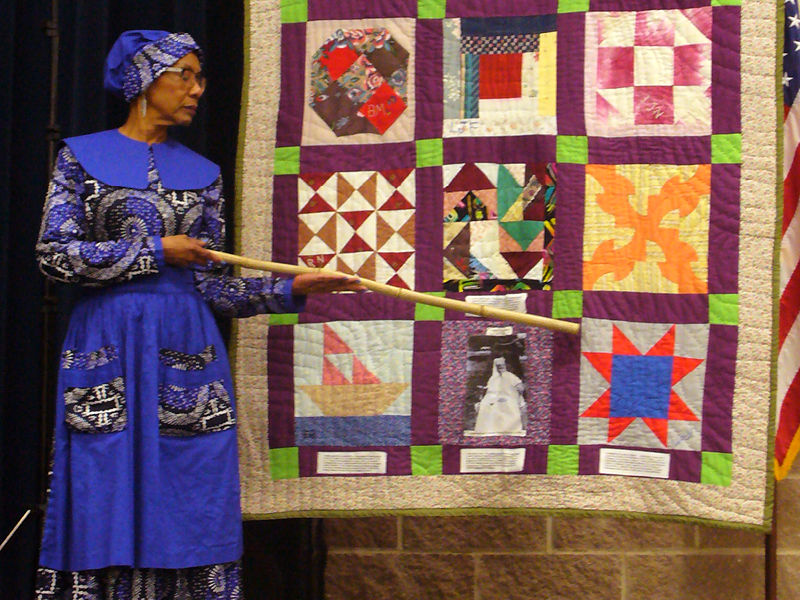 Flo Stevenson points to the North Star pattern, one of several codes shown on this sampler quilt during a presentation in Emory. 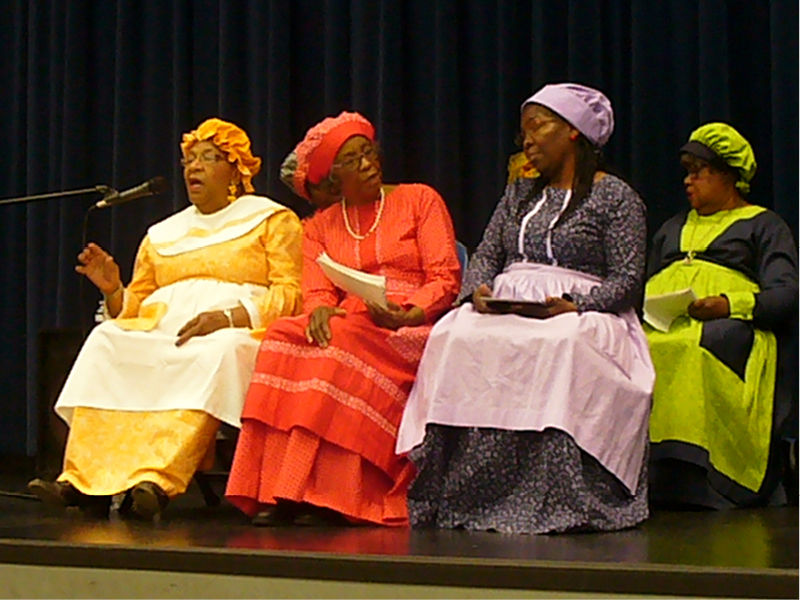 Demonstrating how songs were also coded during the Underground Railroad era, the Pleasant Hill Quilters harmonize in colorful costumes and encourage audience members to sing along. The program is dramatically concluded with a solo ballad.

Flo Stevenson points to the North Star pattern, one of several codes shown on this sampler quilt during a presentation in Emory.

Demonstrating how songs were also coded during the Underground Railroad era, the Pleasant Hill Quilters harmonize in colorful costumes and encourage audience members to sing along. The program is dramatically concluded with a solo ballad.

Some might find their great grandmothers’ quilts harbor more history than they know. What was once thought of as an innocent pastime for modest women might have actually been part of a paradigm-shifting movement. Through meticulous quilting patterns and robust song performances, Pleasant Hill Quilters of Linden, Texas, offer a glimpse into a classified American past. Clad in colorful handmade bonnets and aprons, this group of women works to decode and preserve a cryptic fragment of history, explaining how multitudes of illiterate people escaped slavery.

Literacy among Americans of African descent was prohibited during the era of slavery. Because many were unable to read or write, important information had to be conveyed through oration, imagery, and song. Quilt “codes” were hand-stitched images that, along with some carefully-worded anthems, informed enslaved people about when and how they could navigate to freedom. Free people and abolitionists of diverse ethnic backgrounds contributed by making and displaying quilts, transporting escapees, and providing shelter and clothing.

The stealthy code was displayed any place one might see a quilt — on a clothesline, in a window, draped on a porch seat or rail. Quilts often display a repeating motif, so it was not necessary to see the entire quilt at once. Although there were numerous quilt patterns, or codes, some of the most frequently-used codes included the monkey wrench, wagon wheel, shoofly, and bow ties. All of these are still common today.

Difficult to describe, but easily recognized, the unassuming monkey-wrench pattern looks much like a square frame with oversized triangles spreading from each corner. The appearance loosely simulates a truncated, open-end wrench. This pattern indicated the presence of a blacksmith, who would provide directions to the Underground Railroad.

A basic wagon wheel pattern is a circle of 12 wedges around a smaller center circle. Today this pattern has multiple variations, some quite elaborate. In any case, it resembles a wheel with spokes. This code signaled the opportunity to escape on a cart or wagon, usually under the cover of straw or produce. Transporters cunningly referred to men as “hardware” and women as “dry goods” when conversing with other abolitionists.

Somewhat reminiscent of the monkey wrench, the shoofly pattern has a square center with triangles emanating from each corner. If a slave catcher or someone checking for emancipation documents were in town, this code might be on display. It warned fugitives to scatter because the area was not safe to traverse openly. They would need to determine a location to regroup, most likely after dark.

Much like the wagon wheel, there are numerous bow tie patterns. A fairly simple one that was most probably used during this era, is made up of 36 isosceles triangles. The shapes are strategically placed to look like a series of alternating horizontal and vertical articles of men’s neckwear. Bow ties communicated that runaways could shed their tattered garments and be provided with new clothes. Churches proved to be convenient locations for this kind of transaction.

Patterns like the bear paw, flying geese, and the North Star helped former slaves decipher how to navigate as they entered more rural and wooded areas. Following bear tracks was a good way to find fresh water, fish, and berries. Geese migrate north in spring. Loud honking noises made these birds easy to follow toward food, water, free Northern states, and even Canada. The North Star guided escapees in the same direction during the night.

Because there is almost no documentation of this secret code, some historians want to dismiss the narrative as myth. But keep in mind, literacy was seen as a criminal offense for Americans of African descent during this era. The fact remains, with the help of brave and unprejudiced free people, masses of enslaved Americans were able to realize freedom.

A familiar pattern on a fragile flea market quilt is what inspired the start of Pleasant Hill Quilters in 2004. One of the group’s founders saw the quilt’s monkey-wrench pattern in a book entitled Hidden in Plain View: A Secret Story of Quilts and the Underground Railroad. Curious about its authenticity, she bore the flea market quilt to Antique Road Show experts. That flea market quilt proved to be an authentic relic from the latter era of American slavery, displaying evidence of a crafty code designed to help enslaved people acquire freedom. Preserving this discreet facet of American history became imperative.

From September to May, the quilters meet each Monday at the Pleasant Hill Center (formerly Pleasant Hill School) in Linden. As a school, the building had two rooms for grades one through four and five through eight. Subsequent to the termination of American slavery, Booker T. Washington (founder of Tuskegee Institute) collaborated with Julius Rosenwald (co-owner of Sears, Roebuck and Company) to establish this location and thousands of similar schools for African-descent children throughout the rural South. One of 527 Rosenwald schools built in Texas, the bungalow, constructed in 1925 from new and recycled materials, is now a community center and national historic landmark.

Many young visitors are initially resistant to coming to the community center as it is without internet access. They are soon won over by the combination of performance art, math, and history unveiled by Pleasant Hill Quilters.

The group typically consists of four to 12 retirees. They are a broad mix of former school teachers (one of whom taught at Pleasant Hill School), corporate leaders, and government employees who perform an average of about 20 presentations each year throughout Texas and the surrounding area. Although Pleasant Hill Quilters mainly work within the region, the group has traveled as far as Washington DC with their program.

Pleasant Hill Quilters use quilts as a way to entertain, educate, and encourage healing from a portion of America’s unpleasant past. The ladies work by hand and with machines, assembling about 10 quilts annually. They also produce and sell aprons, bonnets, and cookbooks. All proceeds help maintain the historic building in which the quilters convene.