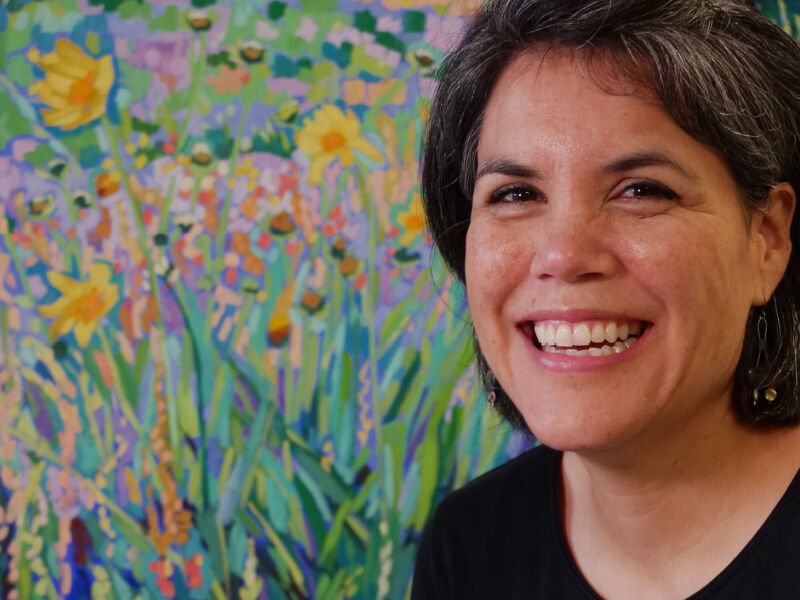 Spring Parnell poses with one of her colorful landscape paintings. 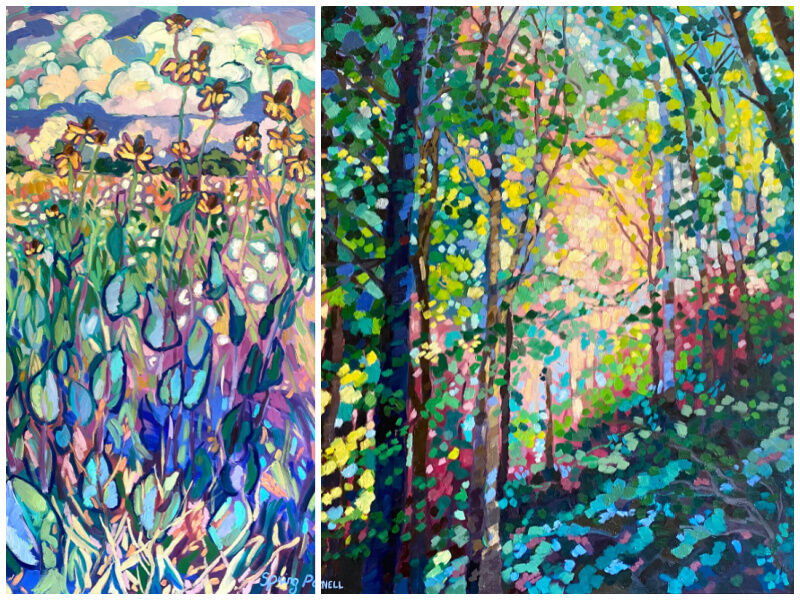 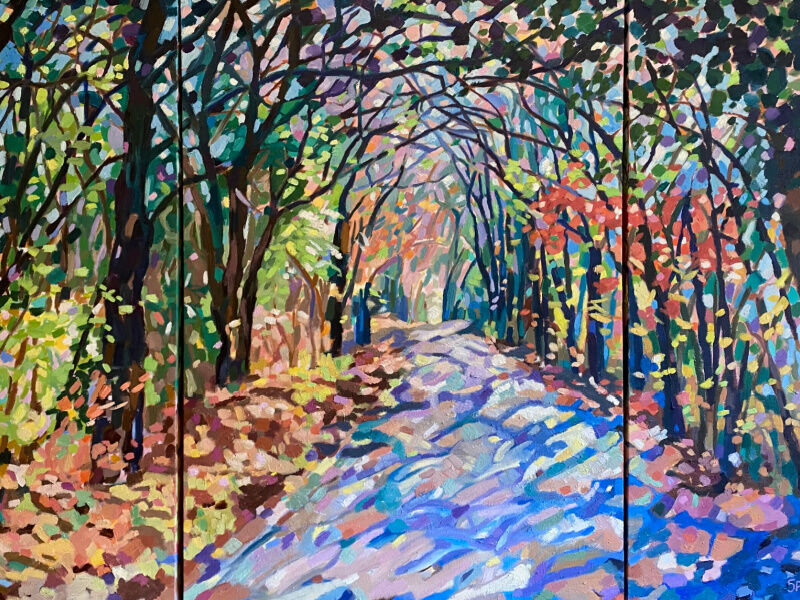 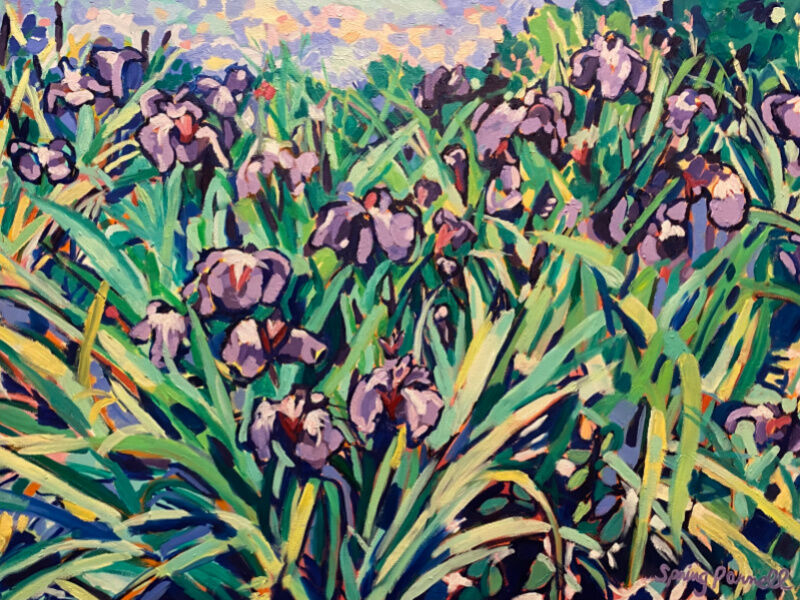 Spring Parnell poses with one of her colorful landscape paintings.

Artist Spring Parnell and her family recently moved from Quitman to a small apartment in Longview to be closer to her job as a high school art teacher. Parnell creates lively, colorful landscape paintings. A cramped family dining room is her “studio.”

In the middle of packing and moving a household of four — including children ages 9 and 6 — Parnell received a call from Ruthann Askew — chair of the Marty Zewick Artist Award committee — letting her know she was selected as the winner of a $10,000 award.

“I burst out in laughter and tears,” Parnell says, “I couldn’t believe it. I’m really excited.”

The award is a project of the nonprofit Van Zandt Arts & Cultural District Foundation. It set out to honor the late artist Marty Zewick of Edom who passed away May 28, 2020. Zewick was one of the founders of the Edom Art Festival, now in its 49th year, as well as the Edom Craft Community. She was one half of the jewelry-making team of Zeke and Marty and a life-long creator who intimately knew the struggles of establishing and sustaining an art practice.

Zewick’s friends and patrons thought helping out an artist in need was the perfect way to honor her. Others that appreciated the cause pitched in as well and a surprising $10,000 was raised. Parnell was selected out of 58 artists who applied.

“I am so honored to receive this award,” Parnell says. “I definitely feel how much Marty was loved. I’m so glad she had a great group of friends and I look forward to learning more about her through their stories.”

Besides the $10,000, the other big perk for Parnell is that the award came with booth space at the Edom Art Festival that took place October 9 and 10. She had heard about the famous festival from a fellow artist and went to apply for it earlier this year but had missed the deadline.

“I knew that the winner could be in the show and when I realized I got to be a part of the festival after all I was so excited.”

Parnell is originally from Kotzebue, Alaska, and is a native of the Inupiaq and Yupik tribes. She comes from a blended family with lots of sisters and brothers and nearby cousins and other extended family.

“I remember nights taking out the trash and realizing just above me were the most amazing Northern Lights performance I’ve ever seen,” she recalls. “Bright green and purple waves of light dancing down right above me.”

Scenes like that began to form ideas and once in the 5th grade, with oil pastels in hand, she drew a large bright orange sun.

“It had sun rays that filled the entire page. I remember that I felt a sense of pride and satisfaction at the piece of work I created.”

Her passion for creating art continued to fuel through middle school and high school and before long she knew it was her calling. Her senior year she was voted “Most likely to climb a skyscraper and be a starving artist in New York.”

But even after graduating from the Institute of American Indian Arts in Santa Fe, New Mexico, she didn’t think art could be a career.

“No one ever told me that I should or could make it as a professional artist,” she says, and she didn’t think of it as an option until many years later.

Parnell returned to Alaska and was doing ministry work when she met her husband Charlie from Texas.

“We were coworkers for a year and took people fishing and hiking in Alaska. We became best friends and then started dating.”

They married in 2009 and both their children were born in Alaska before the family moved to Texas. They lived in Longview for six years, then in Quitman five years until their recent move back to Longview. She worked for LeTourneau University a while and was a Pre K aide at Quitman Elementary before getting a full time teaching job at Pine Tree High School.

Over the years she dabbled in painting and in 2016 she even got a booth at Art in the Square in Dallas. There, she met one of her artistic role models, Erin Hanson.

“She said I could do it, that I could make it as a professional artist,” Parnell says, and coming from Hanson she paid close attention. “After that experience, I thought more seriously about it.”

With her kids still in toddler stages, she didn’t get really serious until they were a little older. In 2020 someone commissioned a painting from her, then she painted another soon after, and she started seeing her work improve and it reignited the passion for it that was always there.

Since then, she’s participated in ArtWalk in Longview, exhibited at Main Street Gallery in Tyler and at Winnsboro Center for the Arts, and this year she entered a painting at the Texas State Fair that won a third place ribbon.

“Since July, I’ve been very consistent,” she says, producing what she could with limited supplies and space.

One of her pleas for the Marty Zewick Artist Award was simply, “I have no more canvas. I’m out of Titanium white. I need to paint.”

Parnell’s landscape paintings are bright and colorful in hopes, she says, to draw viewers in to stay a while “in the quietness of the scene, to listen to the sounds of the grass.” Each piece is created with lines and shapes that evoke a sense of stillness, with brush strokes visible throughout the borders. While she enjoys capturing the Texas landscapes now, it was in a barren Alaska where she learned to look very closely to enjoy “the gift of the land and the joy of being present in it.”

“If you’re skilled at looking, or wise at finding, or simply blessed by being, then it no longer is barren, or dark, or hard,” Parnell says. “Out there are many animals, fish, birds, willows, tundra, and the sea, that make sound. But not only that, there’s grass and wind. Sometimes the wind is warm and sometimes it comes with a bite. But the sound it makes through the grass one can find only by being still.”

Her father taught her to listen to the “sounds of the grass” she says, and she finds peace there in the stillness, beauty, and in her landscapes. Being tied to the land is an important piece of her artistry.

Parnell says she has hundreds of photos she’s ready to turn into paintings, like one she recently completed called “Within the Irises.”

“They’re so beautiful, so strong, yet so delicate,” she says, noting she hopes others enjoy her work and that inspires her to keep going.

“Looking at a painting, I get lost in it. If a painting depicts a rainy day, I’d probably open up an umbrella.”

Parnell says she has a never-ending drive to be a professional artist and it is important to her to get her work into galleries. She hopes to have a place of her own someday.

“I often envision someone walking home one dark evening, and they stop to look at one of my landscapes in front of this bright big open window and gazing through the warm glow it reveals all the rich textures and vivid colors.”

She enjoyed showing at the Edom Art Festival and her work is on display and for sale at Zeke & Marty’s Studio in Edom for the coming year. She loves spending time with other artists during festivals and gets melancholy as they all start to pack up.

“In those times, I have to hold back tears. Because I’m afraid I won’t experience them again or they get lost. It’s a time of making friends with surrounding artists, talking and laughing with fellow art lovers. It feels like I’m walking in another time. Like in the 1920s, with Louis Armstrong or some French song playing, and dusk has settled in. The lights are shining brighter.”

“Although I have cried at the thought of pushing a wheelbarrow full of my paintings, with no buyers, I still believe. I believe that my paintings will bring joy to someone’s dining room. Or that ‘Yellow Giants’ will welcome guests in someone’s entryway. Maybe, while viewing ‘Within the Irises,’ someone will be mesmerized as they try to smell them or simply lounge in front of them for a while as if within them — while feeling the breeze, hearing the birds, closing their eyes, with only the sun’s bright orange light to warm them.”

Now that she’s motivated, and has the funds to help, she’s hoping to get to do some solo shows next year and wants her own gallery and space to store and dry large paintings.

“I’m really excited to get a body of work going to really see what I can do, and now I have canvas and paint to be able to do that and get my work out there.”

The little apartment dining room has a table that’s been in her husband’s family since he was a child. She has a cart that holds her brushes and an easel next to the table. While she can, and does, paint there, it’s limiting, and she’s looking forward to having more space and her own gallery soon.

“Things are moving along quickly now,” she says. “The dream is starting to become a reality.”