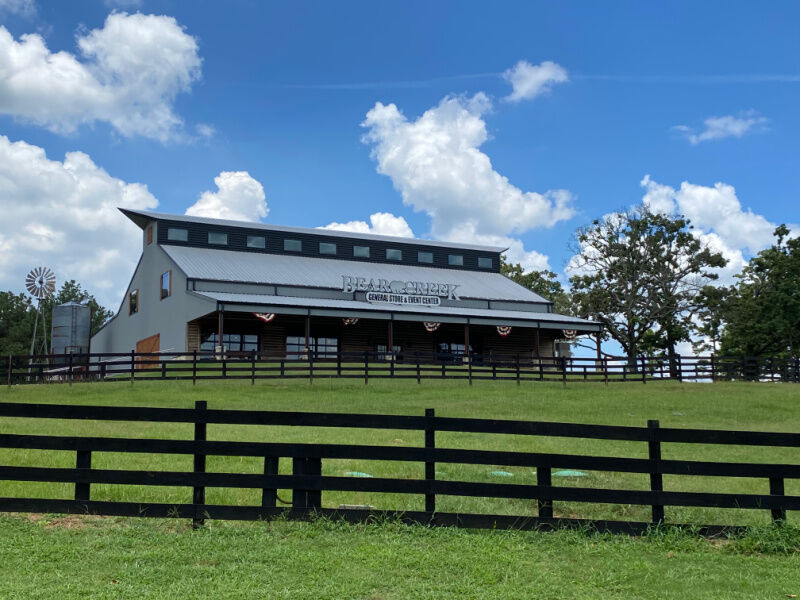 Bear Creek Smokehouse, located at 10857 State Highway 154 in Marshall, features 43,000 square feet of fun, with a general store for smoked meats, food products and gifts and an event center for large gatherings. 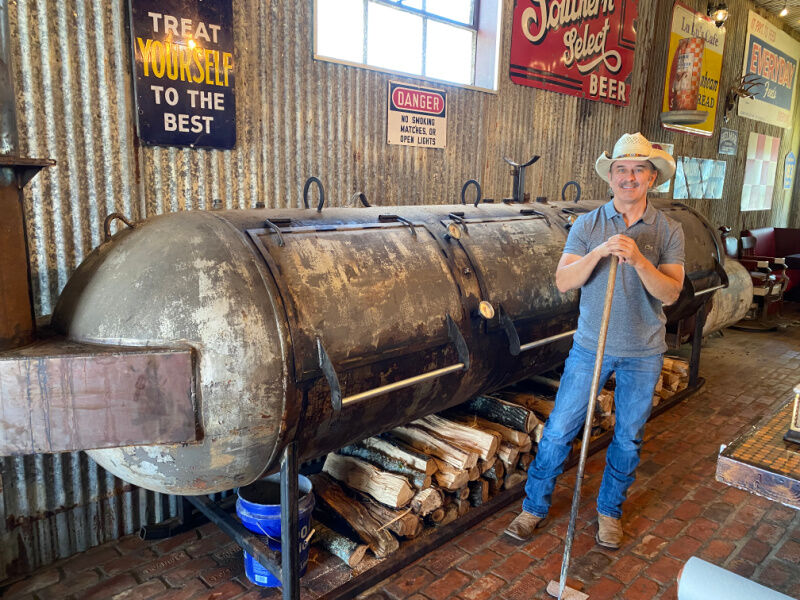 Bear Creek Smokehouse Owner Robbie Shoults with the “atomic smoker,” which is fired up on Saturdays so customers can select their meat hot off the grill. 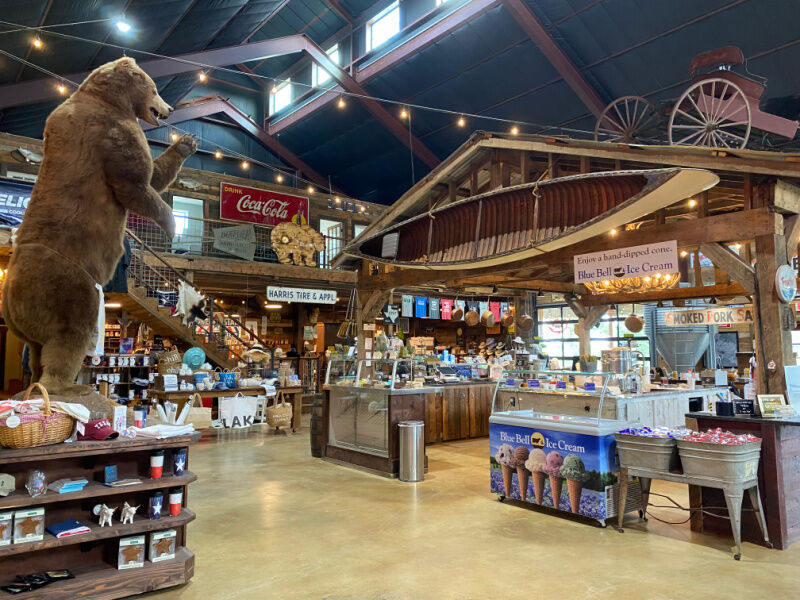 The general store has the original “Smoked Pork Sausage” sign that Robbie Shoults’ grandfather put out on the roadside to attract customers to the family’s smoked meats. 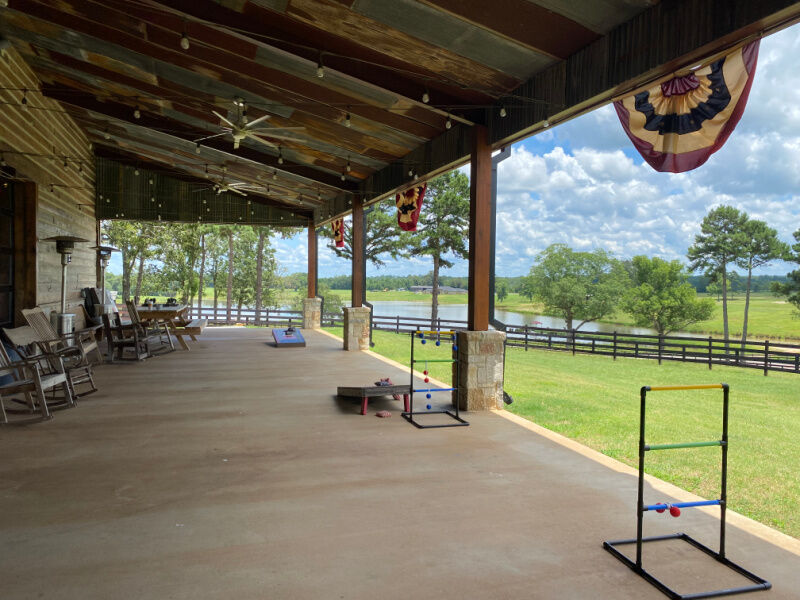 The view from the front porch overlooking the beautiful East Texas countryside is one of the highlights at Bear Creek Smokehouse.

Bear Creek Smokehouse, located at 10857 State Highway 154 in Marshall, features 43,000 square feet of fun, with a general store for smoked meats, food products and gifts and an event center for large gatherings.

Bear Creek Smokehouse Owner Robbie Shoults with the “atomic smoker,” which is fired up on Saturdays so customers can select their meat hot off the grill.

The general store has the original “Smoked Pork Sausage” sign that Robbie Shoults’ grandfather put out on the roadside to attract customers to the family’s smoked meats.

The view from the front porch overlooking the beautiful East Texas countryside is one of the highlights at Bear Creek Smokehouse.

Bear Creek Smokehouse in Marshall, Texas, started out more than 70 years ago as a family farm where nearby residents bought fresh turkeys. Today, it is a premium smoked meats mail-order enterprise and on-site family fun experience. Visitors shop for smoked meats and cheeses and unique gift items, take in spectacular views, feed live farm animals, and eat some of the best barbecue around.

Robbie Shoults and his family are continuing a legacy started by his great-grandfather, who bought more than 2,000 acres of land in the Bear Bottom area of East Texas, 10 miles from Marshall. There he grew cotton and corn to make a living off the land.

After the Great Depression, Robbie’s grandfather and mother, Hick and Nellie Shoults, added cattle and hogs to the mix to supplement the farm income. Soon they built two big chicken houses to raise turkeys.

“My granddad had a great uncle who was an agriculture teacher who told him he could get more profit n on a turkey than on hogs and cattle,” Robbie says.

The first year, he bought 640 turkeys and sold most of them live.

“Ladies would bring their roasting pans and look to see which turkey would fit into it to make their selection,” he says. “He did so well that first year he decided to stick with it and business grew.”

They eventually built a facility to process the turkeys, adding onto the building seven times over the course of the years.

Working with Texas A&M University, the Shoults family came up with a good recipe for smoked turkeys.

“A lot of people wanted the smoked turkeys because they were ready to eat. People enjoy spending time with their family on holidays and less time cooking turkey,” Robbie says.

In 1972, the Shoults family built a new processing plant for their farm-to-table operation, but eventually decided to grow their smokehouse business, buying turkeys already freshly dressed and smoking them in their own special way. Today, Bear Creek Smokehouse ships smoked meats to all 50 states. Its mail order catalog has a circulation of 325,000.

“The smoked turkey brought us to the dance and it is still one of our most popular products,” Robbie says. “But we have so much more to offer: smoked hams, sausage, chicken, pepper pork tenderloin, bacon, the list goes on. We have an extensive selection of cheeses, crackers and honeycomb. We’ve got everything you need for holiday meals.”

The smoked meats and a variety of other food products and gifts, from cookbooks to t-shirts to jarred goods and soups, are available via the company’s website, www.bearcreeksmokehouse.com, as well as at a new 43,000–square-foot general store and event center.

In the fall of 2017, Robbie and his father, Bobby, went on an elk-hunting trip to Wyoming, where Robbie sketched on a notepad his idea for expanding the company’s small store. Sadly, his father fell ill and died shortly after that. Grief-stricken, Robbie decided he needed a project and turned to his expansion idea.

“I decided to go ahead and build a store. I felt like my dad was working through my hands during this project,” he says of the endeavor.

A year later Bear Creek Smokehouse opened the first 10,000 square feet of space, where the Shoults sell a variety of gift and food items, including their smoked meats. It was also used as a wedding or special event center.

“When we had a wedding, we had to move all the merchandise out in order to hold several hundred people. That’s when I decided to add on to have a dedicated spot for weddings and corporate events. It’s been a rodeo ever since we opened this place,” he says of the event center, which can seat up to 350 people.

Today, the massive storefront, which sits atop the hill with the original family home still in view, attracts thousands of people to its doors each month. “People come here to get a Texas experience and we give it to them,” Robbie says.

Located at 10857 State Highway 154, Bear Creek Smokehouse is open from 9 a.m. to 5 p.m. Monday through Friday and from 9 a.m. to 6 p.m. on Saturdays. On Saturdays, Robbie fires up his “atomic smoker” a 30-foot-long meat cooker and customers can choose their meat hot off the grill.

What Customers Enjoy Most

“They love the view No. 1,” he says about the 100-foot-long Texas-sized front porch that offers a panoramic view of the hilly East Texas countryside. “They love the hospitality and the food. We raise longhorns and have a big steer out front named Bull’s-eye that people can feed. They can also feed chickens and turkeys.”

The family’s pig, Wilbert, who is featured in Bear Creek Smokehouse commercials, is there, too.

Besides providing off-site catering for groups as large as 1,500, Bear Creek Smokehouse hosts weddings and large corporate groups on-site. It also has a number of special events, from car shows and chili cook-offs, to music concerts held in the pasture. Musicians have included the Bellamy Brothers and Asleep at the Wheel. The next concert on October 2 features country music singer Darryl Worley, with proceeds going to Hannah House, a faith-based maternity home for young women. Tickets for a barbecue dinner at 5:30 p.m. and the concert at 7:30 p.m. are available www.stubwire.com.

Word about the expanded general store and event center has spread quickly. It’s also helped that Robbie was a guest judge on the Food Network, cooked barbecue twice with Rachel Ray on her television show and appeared on the Today Show with Al Roker. In April, he pulled his smoker to Nashville for an appearance on the Huckabee Show at Trinity Music City. “We showed them how barbecue is done in Texas,” he says.

“We have a lot of other big things we’re working on,” Robbie says. “I don’t know where the stop on this journey will be.”

His dream is to one day turn the land located about a mile away — where his dad and grandfather had an old dairy barn — into a Shoults family farm tour.

And what would his late father think if he could see the place now?

“He would be amazed,” Robbie says. “We’ll do as much business just in the month of December this year than we would have all year long at our original little store. We love having people come here from all over. We pride ourselves on giving the best service with the friendliest staff serving the best food. It’s the best experience anyone can have. I think he’s looking down smiling right now.”