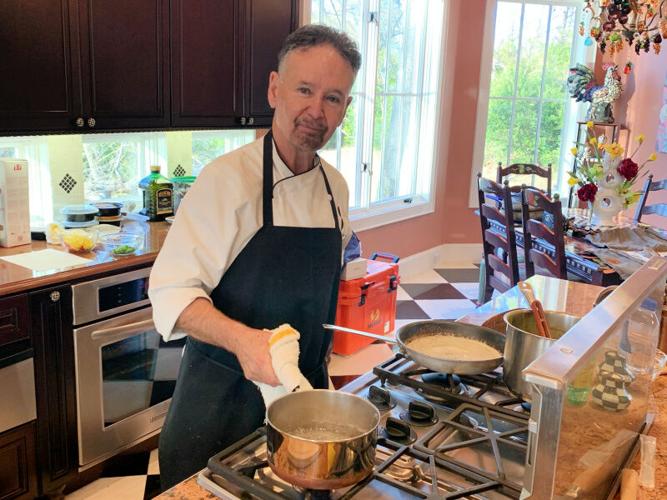 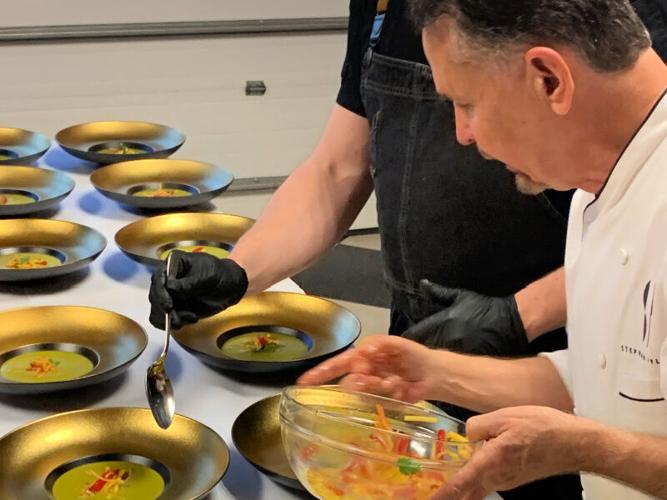 Each of the dinners raised $35,000 for Buckner Children and Family Services in Longview — a total of $70,000 for both dinners. Ten guests attended each.

Chef Pyles brought three chefs with him. They arrived in Longview at 3:30 p.m. each day and started cooking at the home of Vicki and Jim Jones. Co-hosts were Irby and Eddie Liu. Guests arrived at 6 p.m. and the first course was served at 6:45 p.m. The chef mingled with guests during each course to discuss the courses and wine pairings.

The five-course dinner started with a Poblano-Asiago Soup and Mango-Tortilla Salad paired with a 2020 Moscofilero Salto from the Skourus Vineyard in Peloponnese, Greece. The second course was a Roast Garlic Custard, Red Curry Masa, and Brown Butter Lobster paired with a 2018 Chardonnay from The Estates in Milbrandt, Washington. Next came a Black Bean Cake and Seared Sea Scallop with Epazote Crema and a 2020 Beaujolais from Hoppenot Fleurie 'Origines' in Domaine Gregorie, France.

For the entreé Chef Pyles served Beef Ribeye Spinalis with Candied Yam Empanada and Pineapple Mole with a 2018 Malbec Reserva from Altocedro in Mendoza, Argentina.

Chef Pyles is affiliated with nonprofit Buckner International through their collaboration at Ventana by Buckner, a Dallas-area senior living community operated by Buckner Retirement Services, which also operates Buckner Westminster Place in Longview.

The culinary events were auctioned during a fundraising event honoring 30 years of Buckner Children and Family Services working with children and families in East Texas known as “Celebrate Hope." Presented by Texas Bank and Trust, the dinner, silent auction and live auction raised $319,000, which will directly support Buckner programs in the region.

Buckner Longview has a variety of programs in East Texas that serve vulnerable children and families. These programs include foster care and adoption, the Buckner Family Hope Center, Buckner Family Pathways, and Project HOPES.