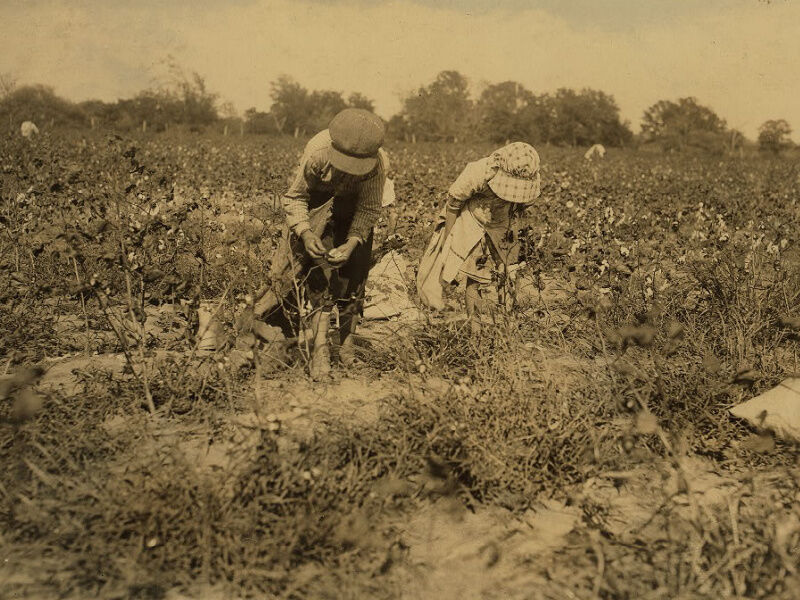 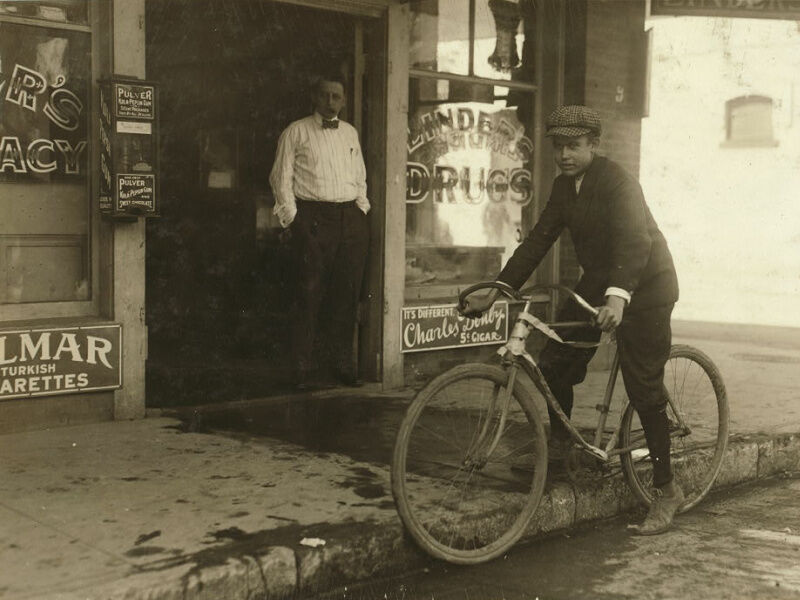 "Fifteen year old delivery boy for Linders Drug Store, which is located on the edge of the Reservation, Griffin St. The boy has just returned from a trip to one of these houses. He works from 8 a.m. to 8 p.m. (See Hine Report on Messengers, Texas.) Location: Dallas, Texas." 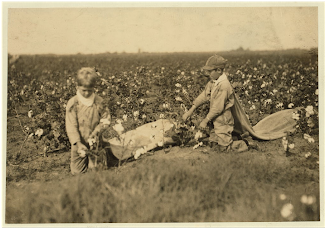 "A fifteen year old boy operating a dangerous boring machine at which he said a boy recently bored half his hand off. To operate this machine (which bores a large hole in the spade handle) the boy has to throw his whole weight onto the lever which pushes the handle (and himself) up against the unprotected borer. A slip might easily result fatally. Boy earns $1.65 a day. This factory has a number of unprotected belts and dangerous machines. One other boy, about the age of this one, was doing all kinds of work, taking away the handles from a huge rip saw, etc., and constantly exposed to danger. Pittman Handle Factory. Location: Denison, Texas."

In 1913, Lewis Hine traveled through northeast Texas for the National Child Labor Committee. He documented scores of children in the region picking cotton for long hours in harsh conditions. Some were as young as five years old.

The Texas visit was part of Hine’s nationwide travels across the nation between 1911-1916, as he documented child labor conditions. In Texas cities such as Dallas and San Antonio, Hine photographed youth working as shop laborers, newsboys, and couriers, either in rough neighborhoods or in dangerous conditions, usually for long hours and little pay.

Many of the photos show children with sad, serious faces in the midst of their labor. Hine wrote detailed captions for each photo, sharing the children’s names, ages, family relationships, how much cotton they picked each day and how long they worked.

Hine also asked the children if they attended school. According to one study cited in the report, up to 300,000 Texas children participated in farm labor rather than attending school.

Today, Hine’s photographs are considered both artistic and documentary. They show an era that disappeared long ago, thanks to the labor movement and subsequent reforms. His collections appear in the Hine Report, now available on the Library of Congress website.

Born in Wisconsin in 1874, Lewis Wickes Hine studied sociology and taught at the Ethical Culture School in New York City. Hine began taking photographs to enhance his teaching. He documented the arrival of immigrants at Ellis Island in 1904 and harsh factory conditions in the Northeast. The Pittsburgh Survey published his work, and was noticed by the National Child Labor Committee.

For more information about Lewis Hine and the impact of his photography, visit the International Center of Photography online.