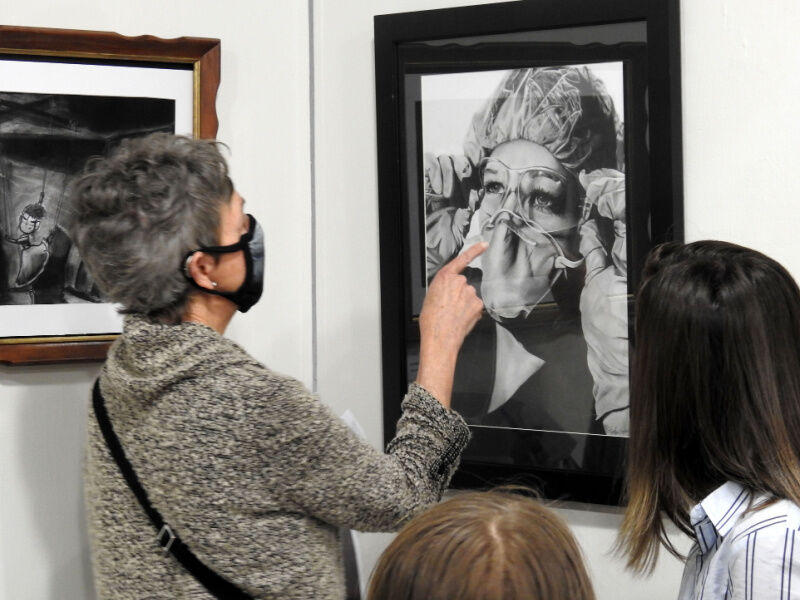 Haley Jasper of Hawkins High School won Best of Show with her drawing, "My Mom Prepping for Battle" in graphite. Artist Shirley Gordon (left) admires the portrait with Jasper (right). 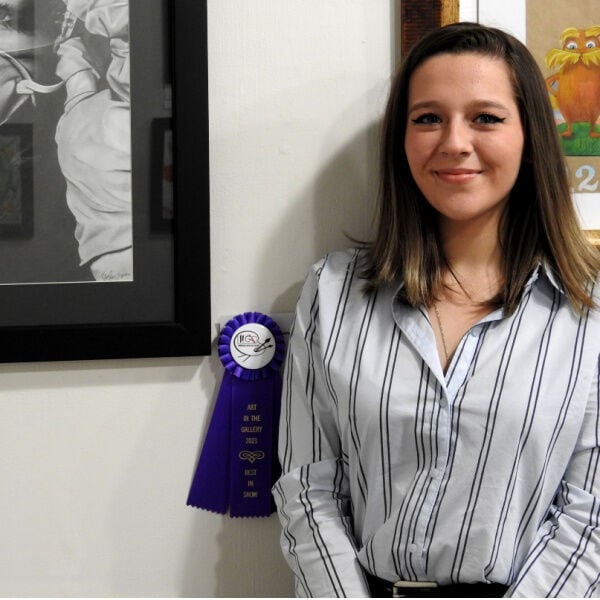 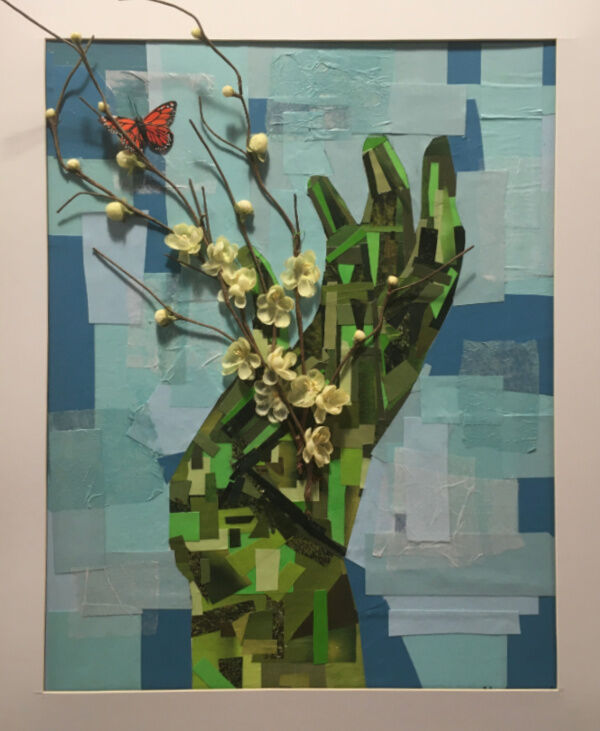 "Reaching for the Sun" in mixed media by Chelsie Slick

Winnsboro Center for the Arts (WCA) is hosting an exhibition featuring the Art in the Gallery High School Art Competition through April 10. The show features 51 artworks by 45 students of eight area schools.

Hayley Jasper of Hawkins High School won Best of Show for her artwork titled “My Mom Prepping for Battle” in graphite.

Jasper uses graceful lines and subtle shadows to portray her mother donning personal protective equipment for her healthcare job. The larger than life treatment of the subject provides a direct view of her serious expression.

Event coordinator Mary Geisler said the contest had “terrific participation” from area schools in the annual contest, which awards a total of $1,000 in cash prizes to up to12 students who submitted art in six categories.

“Much of the artwork received was very good, making the job of the judges a tough one,” Geisler said.

A come and go artist reception on March 7 allowed students, families, and community members to view the students’ entries — from digital media and ceramic to watercolor and pencil.

Winners of the Excellence in Art Award include Josie Howard and Chelsey Slick. Howard’s entry, “The Eyes of Texas,” in colored pencil, portrays longhorn cattle gazing directly at the viewer.

M. Hanner of Winnsboro High School won the Best Use of Mixed Media Award for “Forgotten” in oil, pastel, and colored pencil. According to judges’ criteria, “The artist created a remarkable artwork and showed great skill with her media.” Hanner is a student of Winnsboro art teacher Audrey Brewer.

Jade Countryman, also of Hawkins High School, won the Most Innovative Award for “Evasive,” a watercolor painting of a goldfish composed of hands and other human shapes. This award went to “artwork that shocked or surprised the judges.” Countryman also won a Picasso Award — an honorable mention — for a ceramic depiction of a goldfish titled “Glub Glub.”

Two winners of the Picasso Award from Quitman High School include Oscar Roman for “Archimedes’ Principle” and Bonnie Vander Schaaf for “Daughter of Hulk” in acrylic.

The competition required students to submit their art digitally, prepare required applications, and prepare the art for exhibition. Teachers supported their students by helping them prepare the entries.

“The teachers took a very active role in encouraging their students, [and] helped them with all of their preparations in addition to coordinating with the Winnsboro Center for the Arts’ contest team,” Geisler said.

Winnsboro Center for the Arts is located at 200 Market St., Winnsboro, Texas. For more information visit www.winnsborocenterforthearts.com or call (903) 342-0686.